The Journal of Jeremiah Crane: Chapter 1

I write this in the hopes that some day, if I ever return home, that I should have a record of what has happened to me during this time. Or, at the very least, if this journal should somehow make it back home, that another might learn of what has happened to me, and of the sights and wonders I have seen and experienced, though I'm unsure if anyone would actually believe this. To be honest, I feel like I'm more writing this just to give me some form of hope, a hope that's slowly dwindled over time. Still, I guess it can't hurt to write all this down. Such things need to be recorded after all.

My name is Jeremiah Crane, and I am a man lost in another world.​

I guess I should start off with describing who I am. Since I may not be here when/if anyone finds this. I am twenty one years old, and I hail from Bath England. I stand at roughly a hundred and ninety eight centimetres. I'm rather lean, and a little on the pale side. I have light brown hair, and green eyes. I guess that's a rather simple description, isn't it? Maybe I should try drawing a picture or something

I was an accountant for Sudley's Brass Foundry in Bath, Somerset. A rather simple job, crunching the numbers for the man. The place was often hot though, often making cold winter days like summer. But it was a good job, good pay. I couldn't really complain.

Ok, enough about me. You're all wondering how I got into this situation aren't you? The year was 1898, Well, it your typical day in Autumn. I had just gotten off work, and rather than head home like I usually did, I had been called to the home of a good friend of mine, Gerard Bartholamew. The man was a rather eccentric 'inventor' and self proclaimed man of science. Really, he was an old man who's imagination often ran ahead of him, and often took control of his rather impressive skills in engineering. He was always coming up with some theory based on legends or stories, and always built some sort of gizmo or invention to try and prove his theories right. To this date, not a single one of his theories panned out. Many of the townsfolk considered him a bit of a coot. But ultimately he was harmless (unless one of his inventions exploded, and even then it was only harmful to anyone near them), friendly, and had a bit of a wit about him. Not to mention it was impressive some of the devices he would make, even if they didn't work. I guess that's why I was friends with him. He always added a spice of excitement into the every day monotomy.

I had gotten a letter from him this morning, asking me to come over to his home, but never told me what for. A typical behaviour for him whenever he had something he wanted to unveil. I arrived at his home in short time and knocked the door. It wasn't long before the man answered the door. He was a thin man in his late fifties dark, greying hair messily combed back and a greying mustache. 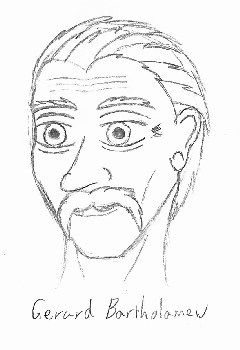 The man's bright blue eyes were alive with excitement and he smiled brightly the instant he saw me. "Jeremy!" he said cheerful, "Please, come in! Come in!" The vibrant old man ushered me inside, barely able to contain his enthusiasm. No offer of tea, or even to take my coat, as he started sheparding me towards the stairs to the basement. "This is it Jeremy! This is it! I cannot wait for you to see this!" he said as we headed downstair. This was nothing new. He was always this excited when he had something he wanted to show me. My mind could only try to come up with what he had built this time. I remember one time he had made a large helmet he thought could allow him to read minds. I was just grateful he didn't burn his head to a crisp.

As we came into the basement, my eyes fell on the invention in question. I must admit, I hadn't expected this. The main piece was a large, brass doorframe, standing in the middle of the room. Various pieces of machinery were hooked up to it, numerous wires and a pair of tesla coils. Not far from the frame was a brass box that acted as a control panel for the whole thing. I stood at the foot of the stairs, staring at it, as Gerard moved over to his machine, his arms spread and a big smile on his face. "Well? What do you think Jeremy?" 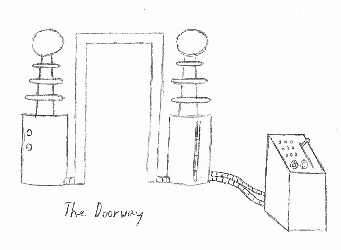 I was quiet for a moment, mentally trying to figure out what it was before giving up. "It's...something. What exactly is it?"

Gerard gave a small snort and a chuckle. "Isn't it obvious? This, is a doorway to another world!"

I blinked a couple of times, trying to process what he had just said. "What?"

Gerard chuckled again and approached me, clasping his hands on my shoulders. "Another world Jeremy! Do you seriously think that our world, this place, is the only one in this universe?" He pulled back and walked towards the machine. "I mean, we see people coming up and writing stories about whole new worlds, paralell universes, that sort of thing. Who's to say that such a thing doesn't exist? Well, my boy, this machine WILL prove such worlds exist. And we, you and me, will be the first to see them!"

Now THAT made sense. Gerard had been reading and once again his imagination had run away with him. I gave a small chuckle, giving the older man a smile. "So, tell me Gerard, have you seen any new worlds yet?" Gerard shook his head. "Of course not! I haven't turned this thing on. I wanted you to be here for it my boy!" I must admit, I felt a bit honoured that he wanted me to be a part of this event. Gerard moved over to the control box, before pointing to a spot in front of the doorframe. "Come, come! Stand right there Jeremy. I'll get this thing fired up!"

After a moment of brief hesitation, I moved into position, though standing a couple of steps further back, just in case this invention proved volitile. After all, it wouldn't be the first time one of his creations exploded. Gerard quickly pressed some buttons, turned some knobs, and finally pulled a lever, before I heard the machine start to hum to life. I could see arcs of electricity rise up along the tesla coils, before they reached out, arcing onto the brass doorframe. I took another step back as sparks shot into the air, electricity crackling around the frame. I was afraid the machine was going to explode, and violently.

Instead, something happened I hadn't expected.

Something formed in the middle of the doorframe. It was feint, before suddenly shining in an almost blinding blue light. I had to shield my eyes to stop myself going blind. Through the growing noise, I could hear Gerard crowing with glee. "It works! It works!" I wasn't feeling so joyful myself. I was worried his creation was going into erupt in a shower of sparks and shrapnel.

Then, all of a suddenly, I felt something jerk my forward. It took my mind a brief second to realize I was being sucked towards the device. Something was very wrong. It shouldn't be sucking me in. Caught by surprise, I found myself stumbling forward, before trying to regain my footing. I could barely see Gerard hanging onto the control box for support. With nothing to grab onto, and the suction growing stronger and stronger, I was suddenly yanked off of my feet. With a cry of panic, I was hurled towards the blue light as the roar of sound grew to defenning levels. All of a sudden, I felt like I was falling. Falling downward, beyond where the floor should have been. I wasn't sure if I screaming during all that. I honestly couldn't hear myself if I did. Before I knew it, I blacked out.

I wasn't sure how long I was unconscious for. As I slowly came to, my mind, slowly trying to piece together what had happened, reasoned that Gerard's invention had exploded and I was knocked out by the blast. But then I noticed something was wrong. The ground was soft, like soil, instead of the stone floor of Gerard's basement. My ears then picked up sounds of nature. That couldn't be right. Even if I had somehow been thrown out of the building, Gereard lived in the middle of town. I would have been in the middle of the street.

My eyes painfully opened, immediately being flooded with light. As I looked up, I could see the silohuettes of leaves blotting out the light. As I blinked my eyes into focus, I realized I was surrounded by trees. Rolling my head to the side, I could see I was no longer in Gerard's basement, but seemed to be laying in the middle of some jungle.

Little did I know then, Gerard's invention had indeed worked. But where it had taken me, I had no idea.