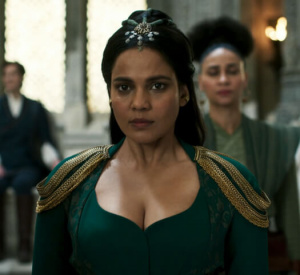 A close up of Priyanka Bose playing Alanna Mosvani in S1E6

Alanna Mosvani is a character in the book and television series The Wheel of Time. In the TV show she is played by the Indian actress Priyanka Bose.

WARNING! The next sections contain spoilers for the Wheel of Time television series.

Alanna is an Aes Sedai of the Green Ajah. She is from Arafel. She has two Warders - Maksim and Ihvon.

She was an Accepted when Moiraine was also at the same level and they used to be friends. Moiraine tells her she could've easily been Blue Ajah based on the subtle way Alanna tries to get information out of her. However, Alanna has chosen the Battle Ajah because of their purpose - to protect humanity from the Dark One at the Last battle, even though she hadn't believed that she will live to see it.

Alanna is strong in the One Power, one of the few who could shield and keep the shield on Logain, the False Dragon.

Alanna is of dark hair and skin. She usually carries her long hair down and she has small bells woven into it.

Alanna is one of the 8 Aes Sedai who were sent to capture the False Dragon Logain.

Episode 4 - Alanna and Moiraine keep the shield on Logain. Alanna believes that the Last Battle is comming based on Logain's sheer strength in the One Power. She wonders if the Dragon has already been reborn, but if the Red Ajah may have gentled him unknowingly.

Alanna is the one to stop multiple arrows shot by Logain's followers after their camp is under attack and flungs them back at the attackers. During the battle with Logain's followers she uses multiple battle weaves to protect herself, her Warders and the other Aes Sedai. After returning to the cave where Logain is kept, she gives her power to Linadrin and they gentle Logain.

Episode 5 - Alanna is one of the survivors after the attack on the Aes Sedai camp and helps bury the rest. A month later she reaches Tar Valon and is a part of the procession which shows Logain to the city.

Later she tells Moiraine that they are both called to go infront of the Amyrlin Seat to asnwer for what they did to Logain. She warns Moiraine that Liandrin is gaining a lot of followers amongst not only the Red Sisters.

Episode 6 - In the Hall of the Tower, Alanna supports Liandrin for her choice to gentle the False Dragon. After the Amyrlin's decision to exile Moiraine, Alanna is surprised but doesn't say anything to her friend.