Books for Young People - The Story of Owen: Dragon Slayer of Trondheim

Okay, so I’m not much of a bard. But that’s not the point. The point is that this book is AMAZING. Absolutely amazing. I loved just about every single page of it, gushed over it to patrons at the library, made my coworkers read it, you name it. This is a book that has everything going for it, provided you’re an absolute dork like me.

The Story of Owen takes place in a universe similar to our own, except there are dragons. Dragons everywhere. They fly, they breathe fire, they eat livestock (and people). Oh, and they also feed on carbon emissions, so if you burn any fossil fuels, expect a visit. Everything we know as our own world history happened just the same – but dragons. Imagine – Roman legions with dragons. William Shakespeare trying to ignore the dragons. Queen Victoria with dragons. World War II with dragons. Gordon Lightfoot writing “The Wreck of the Edmund Fitzgerald” about a dragon attack. Interested? Good.

Our hero is Owen Thorskard, a high school junior born to a famous family of dragon slayers. Our narrator is Siobhan McQuaid, an aspiring musician who finds herself acting as a bard – one of the first active bards attached to a working dragon slayer since Buddy Holly’s plane went down with a couple other bards and dragon slayers on board. (No, really.) Together, the two of them attempt to protect the town of Trondheim, reestablish the tradition of dragon slayers guarding large swaths of countryside instead of taking lucrative contracts in major cities, prevent the dragon apocalypse, and pass algebra. Along the way, they meet conspiracy theorists, soccer-crazed principals, and idiots with mobile phones who would rather get eaten by a dragon than stop filming. They learn important lessons about teamwork, relationships, and sacrifice. Also, there are dragons. (Seriously, READ THIS BOOK!)

Things to Know: One of my favorite things about this book – and it isn’t even one of the best parts – there is NO awkwardly shoehorned/forced romance between Owen and Siobhan. They start as friends, they finish as friends. There’s no strange middle part where they confess their feelings but agree they can’t be acted upon. Owen actually has a different love interest in the book, and there really isn’t any conflict at all around it. It’s so important to have books for teens that show it’s possible to be JUST FRIENDS, and this book does it admirably.

Owen lives with his dragon slaying dad, his famous aunt - the legendary dragon slayer Lottie Thorskard - and her wife, Hannah. Their relationship is simply a fact of the story, and isn’t dwelled upon or used as a point of any conflict, aside from a quick reference to America’s “Don’t Ask, Don’t Tell” policy.

People die, but it happens offscreen – no gruesome detail here, just a “so and so got eaten by a dragon.” It’s actually handled very well, since Owen has moved from the city and doesn’t know how small town memorial services go – and it’s a good opportunity to address the grieving process in general.

Honestly, I loved everything about this book. I loved the tone of the narrative. I loved the chapters where Siobhan gives us some world history infodumps in her bardic style. I loved how she interacts with Owen’s family as well as her own. I loved that she and Sadie (Owen’s sort-of-girlfriend) were friends and supported each other without being catty. I loved the way Johnston wrote our world WITH DRAGONS and made it real while keeping it entertaining.

Five stars, you guys. This one is a must-read. 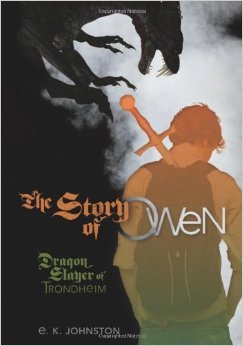