Holidays Around The World: Kukeri

If you ever visit Bulgaria, you may want to enjoy our sun and golden beaches but if you come during the winter, you better plan accordingly and attend the biggest festival my land has to offer you.


First of all, I need to clarify that similar festivals take place in different parts of Bulgaria and in different times of the year, but the most famous and lavish one is the so called ‘'Surva’’ festival. Its location is also quite convenient – in the city of Pernik, just 30 kilometres (19 miles) south of the capital, Sofia. It lasts for 3 days in the end of January, and the exact date is announced in advance.


Now, let me tell you a little about this event. It’s a gathering of groups of people called kukeri who come from different parts of the country and wear different styles of costumes. They dance and usually perform a little scene trying to impress the panel of judges. It’s very hard because the festival is an international one and as you can imagine rather big. As a matter of fact, it was recently included in UNESCO’s list of protected non-material cultural heritage which will probably lead to even more people attending and participating in the future.


By now you must be dying to know what kind of miracle those kukeri are. Without further delay, I give you a picture of some participants wearing very specific costumes known by the name babugeri. 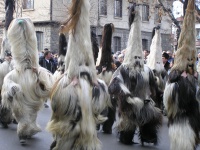 In the past only men used to participate in the festival as kukeri but nowadays we have quite a few women taking part, as well as some costumes that are rather modern, representing politicians and public figures and their relations. What the costumes have in common is the tremendous amount of bells attached to them. As I mentioned they dance, so you can probably imagine the noise.


The origin of the tradition is lost somewhere in Asia around the 5th century, before the Bulgarians came to the Balkans. Historians say the priests who were participating in the traditional winter prayer to Tangra, the sole Bulgarian god, used to wear similar masks, made from animal fur and feathers and decorated with talons, nails and teeth. During the following centuries the ritual became associated with the hopes of rich harvest and chasing the bad spirits that ruled over the winter. As you see, everything started a long time ago so not surprisingly there are different opinions and you could also read that the origin of the tradition is Thracian. I can't tell what the truth is but one thing is certain - the tradition is one of the oldest ones surviving in Europe.

Every group of kukeri has a leader who is the most important figure during the scene they perform. The role of the dance is to make the bad spirits and magical creatures go away by scaring them. That’s why the dancing kukeri could be quite an impressive view. They are really energetic and enthusiastic, so you better step aside if they come too close to you. Yet their dance also aims to attract good luck, health, and money for the whole community represented by each group of dancers. The scenes they play are traditional and probably the most famous of them is a wedding and a fight with a bear. For those of you who are not familiar with the Balkans and their culture, fighting a bear was considered a great proof of bravery (I wonder why). During big festivals and celebrations bears were provided so those willing could prove themselves, or feed the bear, depending on the person.

A very important thing for the symbolic meaning of the masks are the decoration colors. Red is the most used color - symbolizes fertility of the reviving nature, the sun and the fire; the black color represents Mother Earth, and white is a symbol of water and light. The masks often have a wooden frame so they can be carried around. Some of them are rather heavy but the most challenging thing the participants face is the cold. Usually it’s snowing and the temperature reaches well below zero. Maybe it’s part of the reason most of the participants are relying on their home made rakia, which is a traditional Bulgarian alcohol. It’s rather strong so if you decide to give it a try, be careful. On the other hand, the public watching the kukeri’s dance is always friendly and enjoys their time with the foreign guests. So they will probably give you a hand if you drink too much rakia, or just record you and upload the video in YouTube.


Talking with some friends who visited the festival for a first time, I was told it’s like nothing they had seen and I believe them. Even though I lived in Pernik for 18 years I still love watching the magical dances of the kukeri every year. Here is a video that would probably give you better idea about the spirit of the festival.


And some more pictures as well:

Remember, if you decide to go to Bulgaria and see the kukeri with your own eyes, dress warmly and brace yourself – the fun is guaranteed!