WARNING! The next sections contain spoilers for the Wheel of Time television series.

Thom Merrilin is a gleeman. However, he is well educated and knows to recognize accents and dress styles from around the world. Along with singing and playing musical instruments, Thom is also good at throwing knives.

Rand and Mat meet Thom in Breen's Spring on their way to Tar Valon. In that small town, after hearing that one of its citizens is a Darkfriend, Thom kills her and escapes the town together with the boys.

Thom had a nephew, Owyn, who found out he can channel. The Red Ajah Sisters found him and gentled him. After a while, Owyn lost the will to live and took his own life. Because of that, Thom tries to keep Rand and Mat away from Aes Sedai.

Thom looks of middle age, with grey striped hair and beard, and lightly colored eyes. He wears a "gleeman's coat", which is a coat lined with colored patches. 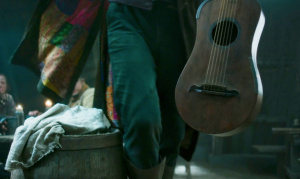 A close up of Thom Merrilin's patch lined coat

Thom is in Breen's Spring and performs "The Man Who can't Forget" in the town's inn the Four Kings. There, Thom meets two youths Rand and Mat, and steals Mat's money purse as a "donation to the gleeman."

Later, during the night, he finds Mat looking at a dead man in a cage at the entrance to the village. Thom explains that this man is an Aiel and was killed by the villagers in fear. Thom and Mat bury the dead Aielman and Thom wishes to give back Mat his money.

After getting back in the village, Thom overhears the Four Kings' barmaid Dana that she is a Darkfriend. Thom kills her and helps Rand and Mat escape Breen's Spring.

On the run, Thom and the boys take shelter in the Grinwells' barn for the night. Thom notices that Mat is not looking very well and that Rand is worried for this friend. Thom tells Rand of his nephew, Owyn, and that he could channel, so Thom suspects this is the problem with Mat. During the night, the farm is attacked by a Fade, killing the family and attacking Rand and Mat. Thom fights the Fade, which leaves an opening for the boys to run away.

"Nothing is more dangerous than a man who knows the past." - Thom Merrilin

Deviation from the Books

This section contains spoilers relating to The Wheel of Time Books. Please expand to view.