For this month's membership spotlight, I decided to focus on someone who has been quietly-present at TarValon.Net for a long time. I think you should get to know Rijomu Sezain.

Rijomu has been a member of the Tower for over 13 years. If you glanced at the Who's Who link, you won't see an enormous list of contributions or activities. One doesn't have to be crazy-active in administration to be awesome. Just as she is, Rij Sedai is probably one of my favorite people to come across when I frolic through our message boards. She's just cool people.


What brought you to TarValon.Net, back in the day?
That was way back. I had been active on another Wheel of Time message board, StoneDog's, for a while when people from Tar Valon came visiting. Eventually they lured me and several others into joining the Tower too and I've been here ever since.


You are a rather long-standing member. What keeps you here?
The people. I've made many friends here over the years and while some old people leave there's never been a shortage of new faces to get to know. I used to go to many RL gatherings, meeting people for real was one of the reasons I joined. I haven't been able to attend any in the last few years but I hope to get back to it one of these years.

One of the places you can find Rij Sedai active at the Tower is the illustrious, perennial Brown Read-a-thon thread. I sincerely enjoy seeing what she's reading, because it gives me new ideas about things I should look into and read. We don't like exactly the same things, but there is significant overlap. I created this diagram to visually demonstrate. 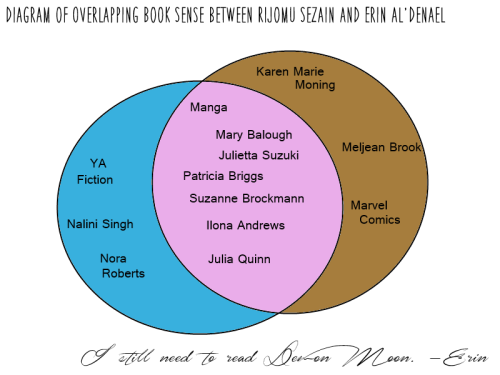 If you were stuck on a deserted island and had to pick books by Patricia Briggs or Ilona Andrews (or some other author!) to keep you company for an undetermined (but long) period of time, which author would you choose?
My standard answer to the desert island question used to be Lord of the Rings or the Three Musketeers since those two are novels I've never gotten bored of. Nowadays I'd start by asking if there's electricity and Wifi and then take my Kindle. I couldn't choose between Briggs and Andrews, actually I don't think that I'd take too much of any one author, a mix of different styles would be much better since sometimes I feel like challenging myself and sometimes I just want to read something I know by heart. If I had to pack, say, 20 books, I'd probably choose a couple of long series that I never finished for no good reason. That includes WOT by the way. :look :o :lol And I just started a new doorstopper fantasy series so I might just take the rest of that with me, should keep me entertained for a while.


Ohh, which new doorstopper fantasy series? :D
The new doorstopper is Steven Erikson's Malazan Book of the Fallen, I'm about halfway through the audio version of the first book. I think I'll try to get the rest in print, it's hard to keep track of half a dozen plots and sets of characters in an audiobook when you can't easily check back. There's ten volumes and thankfully it's complete. We'll see if I can manage to reach the end.


Tangentially (after admiring her rather awesome signature), I discovered that Rij Sedai is a "rabid Marvel fangirl and could talk your ear off about comics."
I grew up on Marvel comics before manga was a thing. Then I stopped reading comics for years until I found manga. If you'd asked me a few years ago, I'd have been all about manga. But Marvel movies lured me back into the world of superheroes (and got me into fanfic too) and now I read only a little manga. I have tickets to see Age of Ultron on the 22nd of April. Finland gets it before America, which fills me with glee.

Not only did she put up with my at-times senseless questions, she indulged my silly language question. I'm rather fond of languages, and our beloved Rij Sedai hails from Finland.

In conclusion, many thanks to Rijomu Sedai for indulging me with this interview! I look forward to many years of sniping books from your read-list. I will also toast you when I go see Age of Ultron, which you've already seen, while I have to wait until May. :rolleyes Despite that, you rock!