Turning Over a New LEAF

Most people who know me know that I love to get out and be active. I think getting sweaty and challenging myself physically is fun, much to the bemusement of many of my friends. But there was a time in my life when I had forgotten how good it felt to be fit, and when I realized that I wanted to make a change and be healthier, I started looking for something to help me get back to that place where I was in shape and content with the way I felt, both physically and mentally. And as strange as that may seem, some smart jewelry helped me get there. The LEAF by Bellabeat helped me introduce healthier habits into my daily routine and, in doing so, has led to me leading a more active lifestyle.

When I started getting serious about living a healthier lifestyle, I knew that I couldn't just go out for a run or work out every once in a while - I needed a good habit that would stick. So, with that in mind, I started looking for an activity or fitness tracker that could help me see exactly how active I had been during the day, thinking that it would help motivate me to get moving. I started looking at the beginning of 2015 but by the end of February I still hadn't found one I liked. I'll admit, though, that I'm a bit demanding. I definitely wanted something more versatile than a pedometer, and I knew I wanted it to be able to track sleep as well as my daily activities. I am the kind of person who would rather put on an accessory and forget about it, so I wanted something that didn't have to be charged regularly. Plus I wanted a tracker that would go with everything and wouldn't be hugely conspicuous when I wasn't in workout gear. Complicating matters, my wrist is ridiculously small. I rarely wear a watch because they don't usually fit and if they do, the watch face usually looks too large for my wrist. Therefore, anything larger than a Fitbit Flex is way too big and bulky on me, and most of the ones that are of similar size had either fewer features than I wanted or were too conspicuous. Having a bright-colored silicone band bouncing up and down as I move (or being too big to pull a sleeve over) is not exactly my idea of practical. I began to get a bit frustrated when I couldn't find something I liked, and I began to wonder if I had set the bar too high.

I first heard about the LEAF on BenderFitness.com, website of my favorite fitness blogger, Melissa Bender. She had gotten her hands on a LEAF before it was even released, and though she hadn't had access to the app, which was still in production at the time, her description of the LEAF itself intrigued me... and I admit, I judged this book by its cover and found it to be much prettier than any other activity tracker I had seen. Intrigued by Melissa's brief review, I turned to the Bellabeat website to find out more.

Marketed as "smart jewelry", the LEAF was designed as an everyday accessory, not as a tracker that you put on just for your exercise sessions. In addition to tracking your activity, it also tracks your sleep and monthly cycle, and can be used for stress management using the app's breathing exercises. It is made in the USA of American White Ash and Stainless Steel, and can be worn as a necklace, a bracelet or a clip, making it more versatile than most other fitness trackers. It is powered by a replaceable battery that lasts 6 months, which means no charging, and can hold up to 14 days worth of data, so it doesn't need to be synced daily. And it's just so pretty. 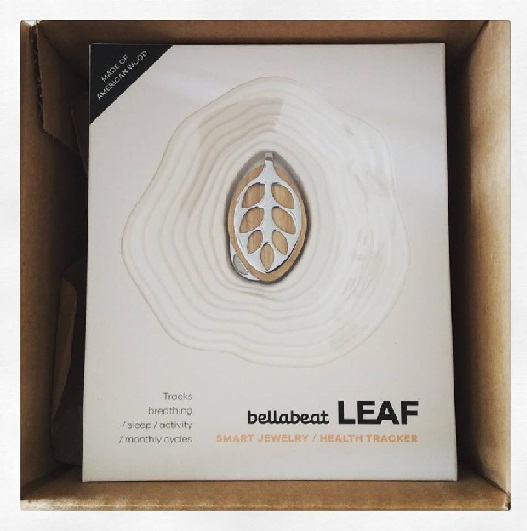 I'll warn you now: it doesn't have a heart rate monitor, nor does it have GPS tracking, which may be a dealbreaker for some. Personally, I wasn't very interested in either of these features, and I already used an app on my phone for GPS tracking while I ran. But everything else appealed to me, and so I took the plunge and ordered one at the end of May of last year.

My LEAF arrived 6 weeks later and immediately caused a big change in my daily fitness routine. The first thing I did after I unpacked it and admired the leather bracelet and metal necklace that came with it was download the app and sync the device. I was required to enter personal information about myself - height, weight, age, and cycle - and choose my daily goals for activity, breathing, and sleep. At the time, the app only allowed you to make an activity goal for steps per day, but now the app has been updated to allow you to select active time during the day. I had no idea how many steps I walked during the day, and decided to pick the recommended 10,000 steps per day (see note) as my daily goal. I put the bracelet on and was thrilled when it actually fit my wrist, and off I went.

Given that it was a summer day, that the LEAF is not waterproof, and that we spent the afternoon at the beach, I didn't wear it all day. When I got into bed that night and synced it to check my daily steps, I was disappointed to see that I hadn't made it to 10,000 steps... not even close. And I realized that most of my days compared to that one were about the same in terms of the distance I walked. I was suddenly faced with hard evidence that I wasn't being as active as I could be, and knowing that I would have a reminder of that every time I synced my new LEAF made me determined to do better.

And do better, I did. I suddenly found more excuses to walk places instead of drive, and with the inactivity vibrating alarm on my LEAF reminding me not to sit still for too long, I made sure I got moving as much as possible. Before too long, I was either getting very close to meeting my goal or far surpassing it daily. And on the days where I hadn't quite met my goal, I would find an excuse to move around a bit more just so I could get in 10,000 steps (dance party ftw!)

I have to admit, however, that I was still a bit unsatisfied. At the time, the LEAF app was quite basic, and I felt a bit like I was wearing a very pretty pedometer, especially since the silent alarm that I hoped would wake me without waking my husband wasn't strong or long enough to get me out of a deep sleep. I did feel like I was getting more active, but many of my favorite activities - yoga, Pilates, weight training - weren't recognized as being athletic pursuits. (In fact, I'm pretty sure my LEAF thought I was taking a nap during one of my yoga classes). But since I had received one of the first products the company had made, I was hopeful that there would be some updates to the app as more feedback came in from customers. Fortunately, this did end up being the case. As I said above, the LEAF app now lets you switch between step mode and activity mode, where you can set a goal in terms of time you are active during the day, instead of steps walked. And the ever-growing list of activities includes most sports, gardening, playing with kids and more, with the number of calories burned during that time being directly related to the data input when first using the app. It also now shows a weekly average for steps/distance walked and active time, which has been really helpful for me in tracking my progress.

The cycle tracker has also been immensely helpful for me. It is neat to be able to look at where I am in my cycle and adjust my activity level accordingly, since being more active at certain moments of the month helps reduce my cravings, stress, and moodiness. My husband has definitely benefited from this! And a few months ago when I started having some health issues, I used the breathing part of the app to help control stress, and was able to use the data stored by the app to talk about what had been happening with my doctor and find a solution.

Here's a quick glimpse into the things I liked and don't like about my LEAF:

In the end, the LEAF still has a few quirks but with each update, the app and the tracker improve a little bit more, and I love it so much that it's gotten to the point where I feel naked without it, since I rely on it so much to show how I have been active throughout the day. And it has definitely made a difference in my daily life; the activity graphs are proof enough that I am motivated to get out and move more just so I can meet my daily goals. Even on the day I finished this article, a day where I knew I would be spending more time in front of the computer, I made sure I got out and went for an hour-long walk with my daughters, just so that I could be sure the activity bar would read 100% at the end of the day. I can't say that any other activity tracker wouldn't have motivated me to get active - in fact, I am sure that if I had bought something else, I still would be making sure I met my daily goals - but the wearability of the LEAF and its unique features make it more enjoyable for me than if I had bought something else. And it's just so cute!

Note: I will add here that the 10,000 steps per day is not an official CDC recommendation, although the LEAF app has set 10,000 daily steps as its recommended goal. See this article for more information.