Cairhien is one of the Nations of the New Era, southeast of Tar Valon and situated between the River Alguenya and the Spine of the World (Dragonwall). Cairhien's capital is the city of Cairhien, which is a major port on the Alguenya, which flows south to Aringill where it joins the longer Erinin and then to Tear and the Aryth Ocean. Its strategic position as the gateway to the Aiel Waste via the Jangai Pass and as a major factor in river trade with Tear has allowed it to flourish and Cairhien to be a moderately rich nation. That position has also worked against Cairhien, as the Aiel have invaded it twice, doing great damage to the capital city and surrounding areas.

Cairhien maintains peace with Andor, the major kingdom to its west and trades extensively with both Andor and Tear, to its south. It is currently ruled by Elayne Trakand who took the throne after Galldrian's assassination, most likely by Thom Merrilin plunged the country into civil war

A similar entry appears in the Wheel of Time Companion confirming the information available in previously published official sources outside of the main story arc.

During the time of Artur Hawkwing's empire, Cairhien was one of the provinces. After his death, an alliance of nobles took the capital and announced they wished to bring the nation of Tova back, but at a ball to celebrate this, all the surviving descendants of the Tovan Councillors were slaughtered. Months of chaos followed until Matraine Colmcille took the city of Cairhien and was proclaimed the first king (The Wheel of Time Roleplaying Game, Chapter 12).

In 509 NE, the Aiel gave the Cairhienin a sapling of Avendesora and with it the right to cross the Aiel Waste. They didn't give their reasons, but this was in response to the ancestors of the Cairhienin sharing water with the ancestors of the Aiel, before they crossed the Dragonwall into the Waste. The called the Cairheinin the Watersharers and allowed them passage through the waste, insisting that their trains of merchant wagons fly a banner bearing the trefoil leaf of Avendesora (TSR, Ch. 34). For four hundred years, Cairhien grew rich of the proceeds, but this ended when Laman had Avendoraldera cut down to make himself a new throne, prompting the Aiel to attack and the Aiel War.

The Aiel War was a conflict between the Aiel and an coalition of the nations on the other side of the Dragonwall. It began when Laman cut down Avendoraldera, to make a throne as part of one of his schemes. Cairhien was captured and burnt, except for the libraries in just a few months. The battles followed Laman until the Aiel were able to kill him at the Battle of the Shining Walls at Tar Valon(TWoRJTWoT, Ch. 14), where a force of around 80000 Aiel faced twice that number of Wetlanders. After killing Laman, the Aiel retreated, having done what they came for. Though many believe they were then forced back, in reality, only a harrying force followed them. Since then, Aiel have held Cairhienin in contempt, referring to them as "Oathbreakers" or "Treekillers' (TFoH, Ch. 20).

After the assassination of Galldrian, most likely by Thom Merrilin, Cairhien fell into civil war with several rival factions competing for the throne. The situation was temporarily worsened when the Shaido passed through, taking many people gai'shain and killing others, but order was restored soon after by Rand al'Thor. He appointed Berelain as his steward, and then when she left for Ghealdan, appointed Dobraine Taborwin, with the intent of eventually giving the throne to Elayne Trakand, who had a claim through her father Taringail Damodred. She eventually took the throne, offering Cairhienin nobles land in Andor that had been recently stripped from people who had rebelled against her (This passage needs a reference) 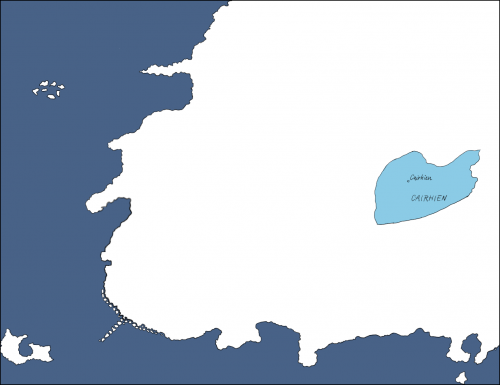 According to the Map, the lands of Shandalle and Tova make up most of modern Cairhien, with the majority of both of these lands being within its current borders. Previously, the land of Almoren occupied the land (TWoRJTWoT, Ch. 10).

The Spine of the World marks the eastern border of Cairhien, with Kinslayer's Dagger forming much of the northern border. The western border is the River Erinin, part of which it shares with Andor, just north of the town of Aringill.

Cities, Towns and Villages in Cairhien

Cairhien is ruled by a monarch, though the throne can change hands and has done so on numerous occasions. The monarch sits on the Sun Throne.

A number of Cairhienin noble houses are known. The two most powerful are Riatin and Demandred, who are the most recent to have held the throne. The houses have a strong rivalry (This passage needs a reference)

Daes Dae'mar, or the Great Game is especially prevalent in Cairhien with virtually all playing, from nobles to servants