Arad Doman is a country on the coast of the Aryth Ocean, known mostly for their very skillful female merchants, who wear scandalously tight clothes.

The Domani believe that they are descendants of those who made Avendesora, the Tree of Life (TWoRJTWoT, Ch. 30).

Domani razors are a rare breed of horse that are not, generally speaking, sold to outlanders. Razors are marked with black meeting white in straight lines that could have been sliced by a razor (KoD, Ch. 6). Razors are favored by Domani bloodborn (KoD, Ch. 8).

Prior to the Last Battle, Arad Doman was in chaos. The King had vanished, taken out of the country by Aes Sedai (ToM, Ch. 32), and Graendal had taken other members of his family and the Merchant's Council. There was no leadership, except in a small number of cities and the capital, Bandar Eban had been flooded with refugees, looking for the food brought there by the Sea Folk under the orders of the Dragon Reborn. They faced starvation however, as the food all spoiled in a matter of seconds (TGS, Ch. 42). The nation had also been under threat from the Seanchan who sent a large army after Rodel Ituralde after he defeated an earlier, smaller invasion. It was being defended by Rand al'Thor and the Aiel until he failed to come to an agreement with the Seanchan (TGS, Ch. 35) and abandoned the country (TGS, Ch. 42). Alsalam was since found, but as much of Rodel's army was killed in Saldaea, it is not clear if the Domani will be able to continue to defend their country (This passage needs a reference). 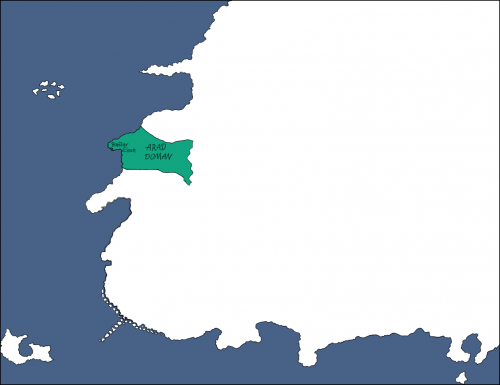 Arad Doman is bordered to the east by the Mountains of Mist, by the Almoth Plain to the South and by the Aryth Ocean to the north and west. It does not share a land border with any other nation (TWoRJTWoT, Ch. 2).

Arad Doman has a king who is elected by the Council of Merchants. The king of Arad Doman is Alsalam Saeed Almadar (TWoRJTWoT, Ch. 30). He is reunited with Rodel Ituralde by Rand al'Thor in the Stone of Tear (ToM, Ch. 32). Alsalam later joins the meeting at the Field of Merilor and signs the Dragon's Peace (AMoL, Ch. 6).

The Council of Merchants is the body in Arad Doman that appoints the king. Once appointed, he may be removed by a three quarters majority vote (TWoRJTWoT, Ch. 26).

Arad Doman has very little in the way of military because a body of soldiers would shift the balance of power unacceptably from the Council of Merchants to the King (TWoRJTWoT, Ch. 26). Rodel Ituralde did manage to raise a large army to defend against the Seanchan, but much of this was destroyed in Saldaea, defending Maradon (This passage needs a reference).

Arad Doman and Tarabon have a history of small wars between them (TWoRJTWoT, Ch. 14). For the past 300 years this conflict has often involved manoeuvring for control of Almoth Plain, which lies just south of Arad Doman (TWoRJTWoT, Ch. 30).

Most Domani merchants are women and the nation owes its wealth to their success; very few men will come off the victor in trade with a Domani woman but they often consider losing worth the experience. (TWoRJTWoT, Ch. 30).

People from Arad Doman are referred to as Domani (TWoRJTWoT, Ch. 30).

Domani are known for their temper (KoD, Prologue).

Domani women are legendary for their grace and ability to get men to do what they want. Only Sea Folk women move with more sensual grace and no other women can compare to Domani women when it comes to the art of seduction. Mothers start teaching their daughters this art in girlhood (TWoRJTWoT, Ch. 30). Very few Domani Aes Sedai choose the Red Ajah, and those who do are usually mean (TFoH, Ch. 32).

Many Domani claim to believe that the Dark One is dead but still will not risk naming him (TGH, Ch. 8).

Arad Doman is noted for some of the grandest celebrations of holidays. Festivals celebrated in Arad Doman that are not celebrated by all nations include Chansein, The Feist of Freia, Bailene and the Festival of Lanterns. Arad Doman is one of only two nations that celebrates The Feast of Fools during Tammaz instead of Saven (TWoRJTWoT, Ch. 31).

The clothing worn by Domani women is considered scandalous by most others. Their dresses cover their bodies from neck to toe but are barely opaque and cling to every curve. They reveal nothing while hinting at everything (TWoRJTWoT, Ch. 30). However, even Domani women dress circumspectly when visiting the White Tower (TFoH, Ch. 15).

Men and women of nobility wear jewelry engraved or embossed with the symbols of their House (TWoRJTWoT, Ch. 30). No Domani would ever wear the symbols of a house other than their own (TGH, Prologue).

Domani food is famous; it is usually spiced meat slivers and vegetables in a variety of sauces. Instead of using forks or knives, Domani eat with two thin sticks, used as a pair, called sursa. These sticks are held in one hand and maneuvered to pick up slices of food (TWoRJTWoT, Ch. 30).