This article is a stub. A longer, more in depth article will be added at a later time.

TarValon.Net held the Britain and Ireland Party 2015 in Dublin, Republic of Ireland, October 2-4. A total of 23 Tower Members attended the party. Over the course of the weekend, members had an official toast and awards, went on various tours, had a formal dinner, and enjoyed each other's company.

The Britain and Ireland Party 2015, held in lively Dublin, Ireland, took place earlier this month and united Tar Valoners from around the globe. 24 people from over a dozen different countries came together from October 2nd to 4th to attend this Fall Ball-style event in a city that has twice been elected as the Friendliest City in Europe. And though I can't speak for everyone, I had a blast!


Though the party officially started on Friday afternoon, I was fortunate enough to be able to meet up with Deleios Gaidin and Isarma Sedai in Paris the day before, and the three of us traveled together on a (delayed) flight from Paris to Dublin and took the bus in to the city center. So, even before we arrived at the hotel, for me the party had already started! We walked from the bus stop to the hotel and even ran into some of the other party guests on the way there, which only added to the excitement. 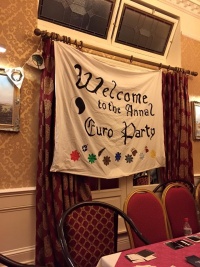 After checking in and settling into our hotel room, we organized ourselves into groups and headed out for dinner, meeting back at the hotel later in the evening for the toasts and ceremonies. It was nice to be able to fit everyone into our common room, and to meet new people and catch up with old friends. And our accommodations were quite nice; our hotel, located on Harcourt Street not far from St Stephen's Green, was within reach of everything we could want to see or do, and was quite comfortable, though the club downstairs was pretty noisy until the early hours of the morning! By comparison we as a group were fairly quiet, though I'm sure the laughter rolling out of the common room during our Cards Against Humanity game Friday evening was quite loud.


Saturday morning most of us met for breakfast at the hotel before splitting up and doing our own activities. Though most everyone decided to go to Trinity College and see the Book of Kells and the College Library in the morning, we arrived in a few smaller groups and went through at our own pace, randomly meeting up with others in the gift shop or outside. Afterwards, we went our own way for lunch - I had a delicious bowl of soup and some lovely one-on-one time with my first sister near the Temple Bar - and the afternoon was again filled with touristy exploration. I took the hop-on-hop-off bus tour to St Patrick's Cathedral and admired, among other things, its beautiful choir and floor tiles, before meeting up with a group who had decided to tour the Guinness Storehouse. At the same time, others had decided to visit the National Museum of Ireland or browse the shops in Grafton street. I thoroughly enjoyed touring the storehouse and especially liked learning how to taste Guinness and my free pint at the end while enjoying a panoramic view of the city! 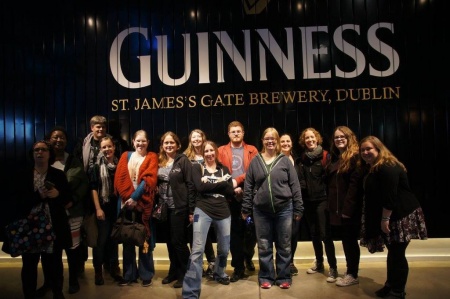 After the Guinness Storehouse we had some free time, and I took the second half of the bus tour with Ealandrelle Sedai and Loraella Sedai, but since there were no seats left on the lower level of the bus we ended up out in the cool wind and were practically popsicles by the time we got off. Since the Tower dinner was to take place in Temple Bar, we decided to get a warm drink not too far from the restaurant while we waited for everyone else to arrive. We ate dinner at Quay's Restaurant and enjoyed some delicious traditional Irish fare - ask anyone at my table about the bangers and mash, and you'll understand one of the many inside jokes of the weekend.


Saturday evening also saw people split up after dinner, with some heading to the pub at the hotel for drinks, others going out on a pub crawl, or still others hanging out in their hotel rooms and enjoying each other's company. A slight misunderstanding meant that the common room we thought we had reserved for the whole weekend had been taken over by a rowdy (and messy) hen party while we were out, but the hotel employees were great about cleaning everything up and getting the room back to us so we could play more Cards Against Humanity.


On Sunday morning everyone slowly started packing up and checking out. A few met for breakfast before leaving, where it was already hard to say goodbye. Some others banded together for a bus tour before heading off to the airport, and those who were leaving in the afternoon had brunch in the city before catching flights home. There were even some who were lucky enough to stay an extra night in the city and explore a bit more of all the amazing things Dublin has to offer before heading home.


A few of the party attendees had some thoughts about this year's party. Imzadi Hopewind told me (and more than once!) that she was very happy to have had the opportunity to see some of her Gray sisters again, and Kerna Shedrian shared these thoughts about the party and how it has had an impact on her view of her city:


"As basically the only Irish representative on the site, when members come over they often ask me what they should do and see. I constantly draw a blank. This is my daily surroundings and I have rarely acted the tourist in my own city. Generally people coming to Ireland have more of an idea of something they want to see than I would. Ireland is famous for its craic agus ceol (fun times and music), its culture and arts, its history and its geography; a pretty diverse list. The problem with recommending things is always that what one person likes is not necessarily what others do. At Europarty, I think we experienced a lot of the different aspects of Dublin and I was only delighted to play the tourist along with everyone. I think I definitely have a better idea of how to direct future visitors around."


Overall, I enjoyed my experience at B&I Party 2015. I had never been to a Fall Ball style party before, and though I did have a lot of fun exploring the city, since this was only my second party (and the first one I attended only counted 14 people!) I missed the togetherness that comes with a party where everyone spends a lot of time together. I was really happy to meet so many lovely members - and guests! - in person, but I do wish I had had more opportunities to chat with everyone. I definitely wish the weekend had been longer so that we could have done more as a group. There was so much to do and see, and so little time!!


A HUGE thank you to the team who made this event possible! Alyssa Letherio, Reniel Killan, and Shariyan al'Fey are rockstars, and I know I'm not alone in saying that it wouldn't have been the same party without them. I have several fond memories of this year's B&I Party, and I hope I can see everyone again - and meet some more awesome Tower people - next year!