Maibella Sedai was kind enough to ask me to be a guest reporter for our lovely Tar Valon Times, since I was attending JordanCon this year. More specifically, she asked me to do a photo gallery of the best costumes. Because I like to help, I agreed, not realizing that I was going to fail miserably because I’m easily distracted. So here’s how it all went down …

Verscen Gaidin and I arrived Thursday night, late, due to some serious traffic outside of Nashville, Tennessee. We ate, said “hi” to some folks, then pretty much went to bed. Friday I got up early, all bright-eyed and bushy-tailed to see my friends and visit - I’m an extrovert, so people are my thing. I hit my volunteer orientation, then wandered around looking at the folks in costume and enjoying talking to folks and staring at the amazing art in the Art Show. Ok, full disclosure, I ran into the Art Show as soon as it opened to get my mitts on a signed print of Ariel Burgess’s Moiraine. It’s absolutely beautiful. I can’t wait to frame and hang it!

It was around this time that I spotted my first victims, cosplayers that I knew I had to take pictures of, though I wouldn’t get around to it until the following day. Their names are Jordan and Heather and they were super cool! I loved that they did a couple’s costume AND they did character poses when I took their picture. As I’m sure you can tell, they are Nynaeve (check out the braid tug!) and Lan. I was so excited when I caught them in costume on Saturday, I’m pretty sure I interrupted them signing up for the Costume Contest. Sorry guys! 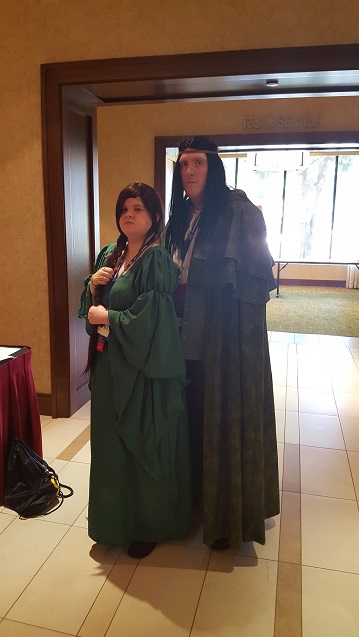 Heather and Jordan as Nynaeve and Lan

Later Friday night, as we were lining up outside the room for the TarValon.Net toast, I bumped into this guy. I knew who he was from the JordanCon Costumers’ group on Facebook. He’s wearing a name tag that says, “Hello, my name is Bors.” I enjoyed the creativity of this costume, but here’s the really cool thing—HE HAND-SEWED IT. That is some serious hard work and dedication to an idea! 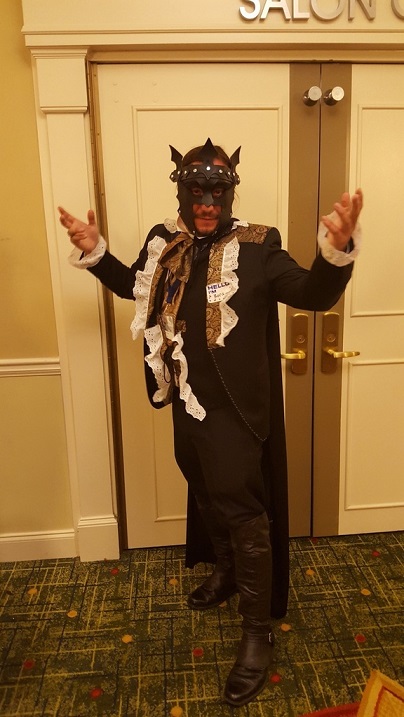 So Saturday … that’s when they have the JordanCon Costume Contest. If you think that the Costume Contest is an ideal place to get photos of the best costumes for this article, you would be correct! Instead, I lost track of time and ended up in a panel about the new Wheel of Time Companion and how fans felt about it. Oops. On the bright side, I was interested to hear that other fans felt like I did, that a lot of the information in the Companion is already known, and that we wish it had more things we didn’t get to learn during the series. The Companion does contain quite a few bright points (if you haven’t, look up Bela’s entry), and I highly recommend owning it!

I found my final cosplayer Saturday night at the dance. He’s dressed as Kaladin from The Stormlight Archive. He had actual LEDs sew into the sleeves of his jacket, as well as lining the blade of his spear. It looked awesome in the darkness when we were all dancing, and I was impressed with his moves! 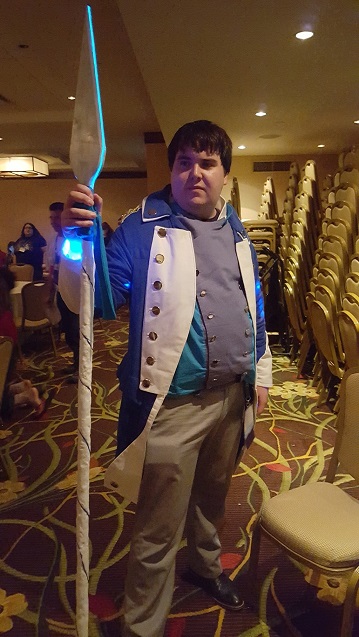 All in all, I had a fantastic time at JordanCon. I wish I had more photos to share with you all, but this is what I’ve got. If you have an opportunity to attend one year, I absolutely recommend it. The people are friendly, the con is well organized, and it’s always a blast. Surprisingly, I also enjoyed writing for the Tar Valon Times, though whether or not Maibella Sedai is willing to let me anywhere near another article remains to be seen!

I’d like to take a moment to thank Jordan, Heather, Kalen, and Aaron again for letting me take photos of them and put them on the internet! Keep making costumes, because you looked amazing.