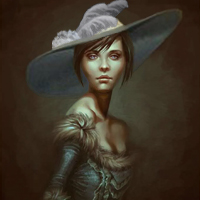 Vivianna Sedai, The Water of the Seals, The Flame of TarValon.Net, The Amyrlin Seat... you know the rest.

Believe it or not, our very own Amyrlin was once a Novice of the White Tower, way back in November of 2002. She joined the site before the rank of Citizen existed, and when you could get raised to Accepted within a month of joining, and an Aes Sedai another month after that.

"Over the course of 2002 I was looking forward to the next book to be released," says Vivianna, "and would periodically look for information about theories in order to get ready and caught up. Around October sometime I had followed a chain of links to TarValon.Net which was on ezboards at the time and was terribly confused because it was festival time for Halloween (I don't remember if we called it Shaoman back then) and the Whites were dressed up as Whitecloaks, the Greens had an anti-men thing going on with their Ajah headquarters and mostly I was just baffled if anyone had actually read the same series I had! After lurking around for a couple weeks, I got a sense of the fun people were having with each other and just being silly and decided to join up myself."

She has always been an avid reader of fantasy, ever since she was a little girl, and has continued with her passion for epic fantasy ever since. "My mother has read Anne McCaffrey for as long as I remember so once I was 10/11 I would pick those up off her shelf and read them which led me to fantasy in general. When I was 14 I was living in North Dakota with not much else to do at certain parts of the year other than read, so I would walk up and down the sci-fi/fantasy aisles at the library looking for new and interesting things. One day I picked up what turned out to be book 3, I believe, and could not figure out what was happening (because it was book 3). After realizing this, I went back to get The Eye of the World and have been reading it ever since."

Vivianna has been Blue for a little over nine years before becoming Amyrlin, and I wanted to know if she knew that she wanted to be Blue, and whether she had ever had an intention of demoting and finding another home, as others who have been around for many years have.

"I was Accepted longer than I needed to back then because the tests went down for about a month so had some extra time to figure out where I wanted to go. I had been waffling about a couple different places, but then a Blue Aes Sedai said something to the effect that Blue was a great place that could combine what were the stereotypical attributes of all the other Ajahs together. This really clicked with me because I consider myself to be fairly well rounded and being a part of a group that could use all those other parts of me appealed greatly."

And her thoughts on demoting? "I honestly have never thought of demoting...being able to take all those other pieces of my personality that would fit in another group and use them in pursuit of my 'cause' or passion meant that I was able to grow and adapt with the group over the years and never look back."

Well, maybe she had a bit of a premonition that she would be the perfect Amyrlin some day, since now she truly is of all Ajahs, and it seems to be a perfect fit for her.

For those of you that don't know, Vivianna has held quite a few positions at the Tower, including two Director positions and numerous staff and admin positions. Not a lot of people contribute to the Tower in so many ways, and it made me curious as to why she's so driven to make the Tower a better place.

"My goal has always been to give others a fabulous and fun place to come to and escape for a bit. I love being behind the scenes knowing what's going on and trying to improve things in my way. I also don't do well when I don't have a goal or a task to work towards so being able to give back to a Community that I believe in so much has always been great for me. We have amazing people who are fun to talk to and fun to work with and make this Community so worth while."

If that wasn't a Miss Universe award-winning answer, I'm not sure what is.

Vivianna has two bonds with Alanar Gaidin of Dai M'hael and Sean Gaidin of San d'ma Shadar. I asked her how she came to bond them and what made her ideal Warders.

"Alanar was friends with a couple of other Blues back in 2003 when he was a soldier and they told us that we had a lot in common so [we] might want to start talking." An arranged Bond? How scandalous! "We became friends, discovered that this was accurate information and once he was raised it was a natural step to apply to bond. He's been out and about more than here for the last few years but we keep in touch on the phone and I made it to his wedding last year which was amazing." And her other Warder, Sean? "[He and] I met when I lived in Washington DC back in 2005 and he's one of those guys you click with right off to the point where I invited him to come with me to Thanksgiving at a family friend's home in Virginia that year. We've stayed friends over the last 7 years so when I had earned a second bond, I really didn't have a question about who I wanted to ask. He's so solid and supportive and heck I bought my truck from him which he then took time off to drive with me back to my home in Colorado from DC last year." At this point Vivianna lets out a dreamy sigh. "These are two men with very different personalities who each compliment a part of me and who are my 'partners' to my friends and family away from the Tower. My parents ask how they're doing (though they've never been able to meet Alanar) and like to keep up on what they're up to. I'm very lucky to have both of them in my life."

Along with contributing to the site in many official capacities, Viv also finds the time to attend many of our events. To date, she's attended eight anniversary parties, five Fall Balls, and one Europarty. I asked her to tell us about af ew of her favorite memories from those events.

"My favorite type of event is the Anniversary/Euro party which I was excited to learn have a very similar feel. I like working together to prepare meals, having that 'camp' sort of atmosphere and having plenty of chit chat and hang out time with everyone. My favorite memories include meeting Alanar for the first time at Fall Ball in 2003, the first time we did Blue Story Time in 2005, the procession into dinner at 5th Anni, finally making it to Euro party in 2011 and of course my investiture this year which was amazing. Events haven't changed a ton in terms of how they are at their core, but the scope and size has definitely increased over the years which has been fun to see!"

"I love seeing people come together for each other. They come together at parties to cook, clean and have a good time, on the boards to give support and to learn about each other, and in chat/on facebook/on the phone to keep building relationships and connections. We support each other and the world around us by giving back to our local communities to to those in different parts of the world through donations to fundraisers. Least? I'd just like to remind everyone that our primary means of communication is the internet...which means you don't have to open every single thread if it's a topic you know you won't like."