Patterns of the Wheel

The Wheel of Time has inspired us in many, many different ways. From music, drawings and paintings, jewelry and decorations, to TarValon.Net itself, it has long ago surpassed the pages of the books.

Recently, one of our many talented members has offered us yet another view of the Wheel of Time. Amela Ba’asa, Aes Sedai of the Brown Ajah, has released a coloring book inspired by the Wheel of Time, called Patterns of the Wheel. The intricate coloring patterns are combinations of motifs from the Wheel of Time and the recognizable style of the traditional folk art of “writing eggs”.

Picking Up A Kistka

The art of decorating eggs for Easter by using the wax-resist method has been known in eastern European cultures for centuries. Beeswax is used to write patterns on a pysanka – a Ukrainian Easter egg (plural: pysanky), and this style allows for the patterns to be simple or as intricate as lace – something that Amela Sedai has always been fascinated with. It was in 1996 that she picked up a kistka (the tool used to apply the melted beeswax onto the egg) and tried her hand at egg-writing. The encouragement came from a woman that she had met, a recipient of the National Endowment for the Arts National Heritage Fellowships, and even though Amela Sedai herself had believed at first that it would be too difficult for her to do it, today we can see and admire her skill. “Alan (my husband) got me the supplies for my 40th birthday, and I've never looked back,” Amela Sedai says. “I love everything about writing pysanky, from the smell of the melted beeswax and the intuiting patterns on an egg, to the big "reveal" when you melt the wax off and see the outcome of your many applications of wax and dips into various dye colors. When you write pysanky, you're telling a story...”

As Amela Sedai tells, she had always wanted to do a series of eggs where each egg would only have the color of one of the Ajahs. She was encouraged by her husband and her friend, Sulamein Sedai, to contact Harriet and introduce her to the idea. Harriet had already been familiar with her work, since Amela Sedai had written eggs for her and Robert Jordan, and the answer to Amela Sedai’s suggestion was “an enthusiastic 'yes!'”.

The first display of these eggs was at the 2015 JordanCon. The eggs naturally attracted admirers, and, much to Amela Sedai’s surprise, many of the visitors were interested in a Wheel of Time themed coloring book of the same style. The thought stayed with her while she was working on her first coloring book (Hand-drawn: Pysanky-inspired Coloring), and when she contacted Team Jordan as well as other people in the Wheel of Time world, the idea was warmly greeted.

Amela Sedai gave Theolyn Sedai permission to color one of the images in her new book to share with readers of the Tar Valon Times. 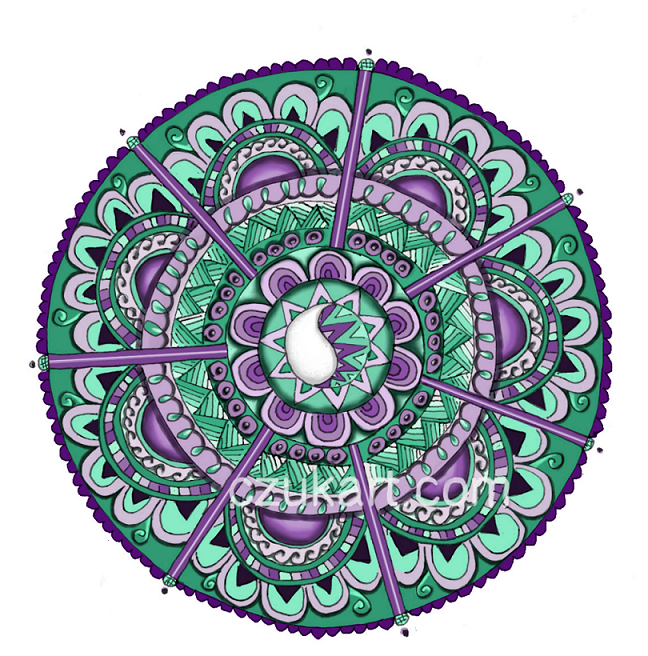 Amela Sedai would like to thank Mother and Serenla Sedai for all the help and encouragement she had received in the process of creating and publishing Patterns of the Wheel. Creativity comes in many forms and shapes, and as she says: “If you want to see Moraine, or Mat, or even a Trolloc, you'll have to wait for the next coloring book by one of the other artists. But if you want to color a Tinker's wagon, Verin's bookshelf, or the Horn of Valere, or to try your hand at a mandala based on the Court of the Nine Moons, Patterns of the Wheel might be the ticket.”

As she revealed to us, Amela Sedai doesn’t plan to stop just on this coloring book: “The series offers so much inspiration. I just finished a pysanka that I call Stormy Seas, which was inspired by the Atha'an Miere. I'd like to do more [pysanky] inspired by the Ajahs, too. […] Plus I have ideas for other drawings as well.” Thank you for sharing your art with us, Amela Sedai – we are already very much looking forward to the new patterns!

You can learn more about Amela Sedai's artwork at her website: http://czukart.com/

While different shapes are used to convey a certain message, colors, too, can have a meaning. Amela Sedai found this particularly interesting while she was writing eggs for the seven Ajahs, since the meaning of the colors did not quite match the properties of the Ajahs. As she says: “I'm pretty sure that when Robert Jordan assigned qualities to the different Ajahs he didn't consult a pysanky artist!”

Therefore we would like to put you before a challenge! We offer you explanations of each color used in writing pysanky – can you guess which one is attributed to which color? Hint: gray color does not appear, but black does.

1. Probably the oldest symbolic color, and has many meanings. It represents love and joy, and the hope of marriage. It is also associated with the sun.

2. A particularly sacred color, and is most commonly associated with the "other world", but not in a negative sense.

3. Symbolizes the moon and stars and also, agriculturally, the harvest.

4. Represents blue skies or the air, and good health.

6. The color of new life in the spring, it represents the resurrection of nature, and the riches of vegetation.

The results will be revealed in a comment on the last day of March.