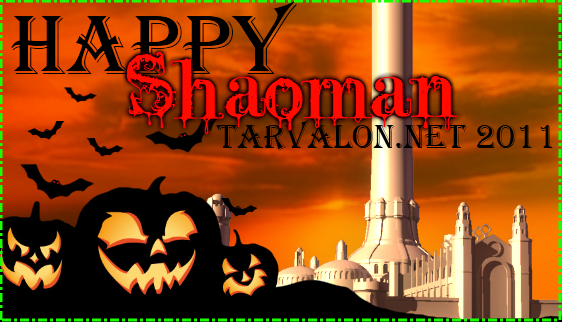 Shaoman this year occurred from October 14th to the 23rd, extending an additional two days due to Fall Ball weekend interfering with ______. There were several official tournaments hosted, including two chat events in #oldewarderandhen - Apples to Apples and Trivia - as well as other contests that happened on the forum: a signature contest, four costume contests, and a group avatar theme competition. Three community groups hosted unofficial events, and there were other events for people to participate in as well in the Faire Grounds.

An Apples to Apples tournament was hosted in #oldewarderandhen. The results follow:

As with every festival, a contest was held to choose the next event's official signature. There were three entries.

There were four separate costume contests held this year. Follows are the categories and the entries for each category. 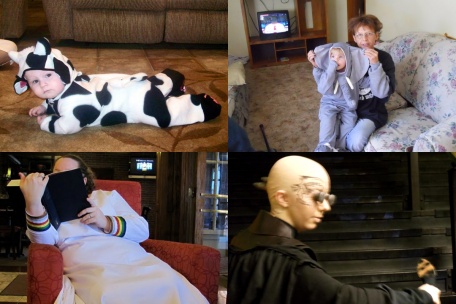 A trivia contest was held in #oldewarderandhen. Contestants had to answer trivia questions regarding "spooky" things. Trivia ran for three days, with winners being chosen for each day as well as an overall winner.

Which Witch is Which Contest

A "Monster Mash Match Up" was held, pairing off people and giving them clues to post in a thread in the Faire Grounds to try and deduce their matches. A full list of matches, along with the questionnaire, can be found on the Monster Mash Match Up page.

Along with the signature contest, people were asked to dress up the Faire Ground Fairy's avatar into something appropriate for the Feast of Lights festival held in December/January. However, no entries were received.

A ghost story, featuring our favorite trolloc, Narg, was hosted during Shaoman. It was told in a round, where each person posted 2-3 sentences based only off of the previous post's information (or a bit further back if they need clarification). The entire story can be read on the Ghost Story Round page.

A sampling of avatars from this year's Shaoman

The Blue Ajah as "The Dark Blue Ajah"

The Blue Ajah posted a thread in the Faire Grounds inviting people to join the Dark Blue/Black Ajah. Much Caps-lock occurred!

The Brown Ajah played clips from cult films such as Carrie, Plan 9 From Outer Space & Dracula vs. Frankenstein.

The Gray Ajah as "Where's Waldo?"

The Green Ajah as "Witches"

The Green Ajah brewed potions, disguised as alcoholic beverages, that had hidden results for the person who drank them.

The Red Ajah as "Deadly Ponies"

The Red Ajah were My Little Pony ponies, where Leese played the role of "Lis the Ripper" whose quest was to kill all of the ponies.

The White Ajah as "Jessica Rabbits"

The White Ajah were various Jessica Rabbit's, from the film Who Framed Roger Rabbit?

The Yellow Ajah as "Escape from Arkham Asylum"

The Yellow Ajah were various characters from Batman that have been locked away in Arkham Asylum and have now escaped.

Dai M'Hael as "Dark Lords of the Sith"

Few Dai M'Hael Gaidin participated in Shaoman this year, and no thread was created.

San d'ma Shadar were dressed as Epic War Bears, setting up a thread in the Faire Grounds asking for offerings to spare people from the havoc they could wreck.

Val'Cueran were various doctors, such as Dr. Cox from Scrubs and Dr. Hannibal Lecter from Silence of the Lambs. They offered various "cures" to those with ailments.

A few citizens dressed as characters from Dr. Seuss and recited rhymes.

The Novices as "Nuns"

The Novices opened up a "Hail Mary Pub" where they offered drinks to anyone who came in.

The Accepted as "Care Bears"

The Accepted dressed as Care Bears, though no thread was created in the Faire Grounds.

The Garrison as "Zombies"

The Garrison teamed up this year to become zombies. A thread was posted in the Faire Grounds where they terrorized and ate people.