Shienar is one of the Borderlands and as such has a martial culture, with the need for constant vigilance against Trolloc raids from the Blight to the north. Relationships with the other Borderlands are excellent, with this strengthened by intermarriages between the leading houses (TPoD, Prologue). As a result from the need for security, the constant jockeying for position of Daes Dae'mar, seen in many of the southern lands, is almost unknown there. As Shienar is far north, it can be very cold, enough to freeze the sap in trees and cause them to burst (TEotW, Ch. 46). Compared to further south, such as the Two Rivers, even a spring feels like winter (TEotW, Ch. 46). The land has many hills.

After Rand is proclaimed and has not visited the Blight, King Easar leads a larger army south, with the other Borderland rulers, to meet him, though whether to join or confront him is not known (WH, Prologue; WH, Ch. 27).

Like all of the Borderlands, Arafel became a nation near the beginning of the War of the Hundred Years. Concerned about the ongoing war, the governors of the five northern provinces held a meeting; the outcome of this meeting was an agreement to form five independent nations. Because the purpose of these nations was to work together against the Blight and to protect themselves against the fighting in the southlands, for the most part Shienar did not take part in the war outside of self-defense. The first queen of Shienar was the governor of the province, Merean Tihomar 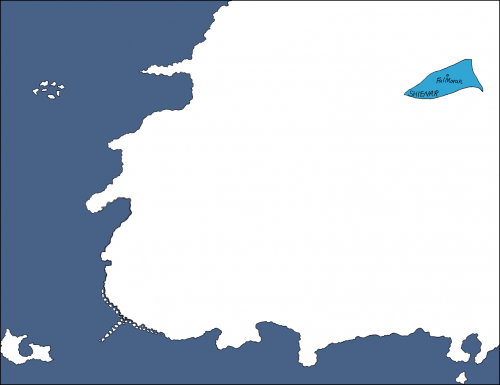 Shienar borders Arafel to the west and the Spine of the World, with the Niamh passes, on its eastern border. Until 950NE, Malkier lay to the north and Shienar was not truly one of the Borderlands, though it would still send men to fight (TEotW, Ch. 40). To the south, the land is unclaimed, though once it bordered Hardan, and when Hardan fell, Cairhien briefly claimed the land up to the river Erinin (TGH, Ch. 10).

There are stedding located in Shienar, including Stedding Sholloon. Sanshen and Qichen may also be in Shienar as they are the most northern of the thirteen stedding in the Spine of the World (LoC, Ch. 21).

Shienar is a monarchy, with Easar of House Togita currently on the throne. He is widowed, with sons. Internal strife is almost unknown, with the presence of the Blight and threat from Shadowspawn looming large in everyone's minds; however, since Rand proclaimed himself, disagreements over whether he is the true Dragon have occasionally escalated into minor battles (TFoH, Prologue; LoC, Ch. 9).

Mounted Shienaran warriors are known as lancers, because of the weapons they carry (TWoRJTWoT, Ch. 28).

Fighting men from Shienar have their heads shaved except for a topknot (TWoRJTWoT, Ch. 28).

When the Shienaran military ride, every man knows who is next in line of the chain of command, such that even if all fall down to one man, he is not just a straggler, he has the command and the duty to do what must be done (TGH, Ch. 11).

Where possible, Shienaran towns are built on high ground and cleared all around, with grass cut short to give a clear approach. Walls surrounding the towns have high look out towers and strong gates (TWoRJTWoT, Ch. 28).

Cities, Towns and Villages in Shienar

The people there value peace, beauty and life above all else (TWoRJTWoT, Ch. 20).

Ogier are known and respected in towns such as Fal Dara, with the greeting "Kisereai ti wansho" or "glory to the builders” (TEotW, Ch. 46), to which the response is "I am unworthy and the work small, Tsingu ma chobal".

Shienarans have a love of ceremony and take shame the same way other people might take being branded a thief (TGH, Ch. 2).

Shienarans bathe in communal pools, men and women together, where rank loses its distinction (TGH, Ch. 2).

Men and women have separate apartments, with men not being allowed into the women's unless they have permission or are invited in. No male above the age of ten would enter without such permission (TGH, Ch. 4). If they want to speak with someone, they must send a message and wait for it to be delivered and for there to be a response (TGH, Ch. 8).

They use the expression "peace favour your sword", or Suravye ninto manshima taishite in the Old Tongue, as a blessing.