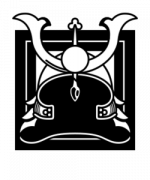 After trying several inns with no success, Lan and Bukama reach an inn named The Blue Rose. The innkeeper is a handsome graying woman; as soon as she sees Lan and Bukama, she strides towards them and kisses Bukama, snapping at him that it has been six years without a word.

While Bukama is otherwise occupied, a man named Ryne Venamar, an old friend, approaches Lan. They go to a table and sit down. A serving maid named Lira brings them wine, and gives Lan an invitation to spend the night with her.

Lan and Ryne talk about a few things, including the fact that a woman named Edeyn Arrel, who was Lan's first lover, has raised the Golden Crane (Malkier's flag) in Lan's name. There are several hundred men in Canluum alone ready to follow her and Lan. With a lot to think about, Lan goes out to the stable and paces for a while, thinking about Edeyn and Malkier as he does so. Eventually, he sits down and assumes the ko'di, calming himself.

Bukama shows up and tells Lan that he has heard about the Golden Crane and Edeyn. When they leave the stable, there are six men walking towards them. Lan knows even before they draw their swords that they are going to attack him and Bukama. Since Bukama not only doesn't have his sword with him but has sworn an oath to keep the peace, Lan orders him back into the stable, and Bukama obeys. Lan then goes to meet the six attackers.

Lan assumes the ko'di once again, they begin to fight. He relieves one man of his left eye, and receives a gash across his ribs from another man. Lan slices off another man's left arm, and is rewarded with a nick near his own eye from the same man who cut him before. Lan knows that the only reasonable outcome will be for him to die, but he fights anyway; his duty is to Bukama, who is not able to fight for himself while in Canluum. He kicks in the head of the man who has wounded him, and continues to fight the men while suffering injuries himself.

When Lan finally stops, he realizes that all of the six attackers are now dead. People begin to flood out of the inn, demanding to know what has happened. Lira and Bukama both run to Lan, checking on his injuries. Racelle Arovni sends a woman for the Watch.

Ryne also goes to Lan, and remarks that two of the attackers had been men who had listened to Edeyn. For this reason, he thinks that perhaps Edeyn was behind the attack. She has raised the Golden Crane in Lan's name, but with Lan dead, she could be Queen of Malkier. Lan is angry with Ryne for saying this, not because he doesn't believe Edeyn capable of it, but because there are strangers around.

Bukama asks Lan where they will be going now, and Lan replies that they will go to Chachin.