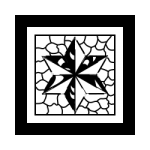 When they reach the room where the test is to take place, Moiraine is dismayed to see that Elaida is one of the Aes Sedai who will participate in the test.

Moiraine steps into the testing ter'angreal, and the test begins. She finds herself standing, unclothed, in a plain stone corridor. She also finds clothing on a table and dresses herself. When she continues walking, the dress she is wearing disappears. By the time she leaves the corridor, she is naked again.

Three men appear and proceed to leer at her. Forcing herself to walk calmly, she reaches a six-pointed star set into the paving stones of the courtyard. Once there, she completes the first weave and creates a wall of Air to keep the men away before going to another six-pointed star.

Moiraine now finds herself in a rough-dressed stone corridor, and also finds a new set of clothing. Once she is dressed again, she continues on. Once outside, she reaches another six-pointed star and begins the second weave. Suddenly, she is entangled in blackclaw bushes. Death's head spiders begin to crawl towards her, and she kills them with Fire while she continues to weave.

The next part of the test sees Moiraine battling Trollocs, killing them with balls of Fire, while she does her third weave. Once she is done, she makes her way to the next six-pointed star.