Channeling and channelers are outlawed in Amadicia, and thus Aes Sedai avoid Amadicia at all costs (TWoRJTWoT, Ch. 30).

Thieves are treated harshly. The thief is branded on his first offense, the right hand is cut off for the second and the third offense results in hanging. The penalty is the same whether the stolen items were valuable or worthless. Thieves avoid the nation as assiduously as Aes Sedai (TWoRJTWoT, Ch. 30).

Amadician law forbids the building of walls around cities, except in Amador; the law was made at the request of and is enforced by the Whitecloaks (KoD, Ch. 12).

An entry appears in the Wheel of Time Companion for this article but no information is available in the main story arc. 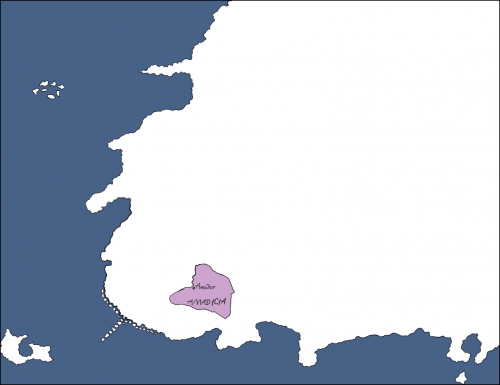 Amadicia is south and west of the Mountains of Mist and located between Tarabon (to the northwest), Altara (to the east), and Ghealdan (to the north), with the River Eldar forming the northern and eastern border and the River Sharia the southern border (TWoRJTWoT, Ch. 30). To the southeast lies the Shadow Coast and Windbiter's Finger as well as the Sea of Storms (TWoRJTWoT, Ch. 2).

Tall stone pillars to either side of the road mark the border between Amadicia and Tarabon (TFoH, Ch. 8).

Amadicia is officially ruled by the King of Amadicia but the real power lies with the Children of the Light who have their base of power, the Fortress of Light, in Amador (TWoRJTWoT, Ch. 30).

The Lord Captain Commander is the ruler in fact; he governs through military and political might (TWoRJTWoT, Ch. 25).

Until recently, the king of Amadicia was Ailron. Ailron died fighting the Seanchan (CoT, Prologue). His replacement is unknown.

The King resides in the Serenda Palace, located two miles from Amador and the Fortress of the Light (TWoRJTWoT, Ch. 30).

The King makes up for his lack of real power by surrounding himself with pomp and circumstance, and a court full of nobles (TWoRJTWoT, Ch. 30).

The King performs all ceremonial duties. Ailron, the most recent king, did have some power so long as he didn't go against the wishes of the Children (TWoRJTWoT, Ch. 30).

By law, noblemen's houses must be built of wood, not stone (the Whitecloaks are exempt from this law). This is to ensure that rebels would not be able to hold out long against the King (TFoH, Ch. 13).

The Amadician Guardians of the Gate is considered to be one of the main military groups of the last centuries (TWoRJTWoT: 26).

Cities, towns, and villages in Amadicia

Amadicia does not have good relations with the Atha'an Miere (TGH, Ch. 29).

Women who are healers must be careful; if they cure too many people too quickly they might be accused of being Aes Sedai. For this reason, most of the healers in Amadicia are men (TFoH, Ch. 10).

Festivals celebrated in Amadicia that are not celebrated by all nations include the Feast of Abram, Bailene, Genshai, and the Festival of Lanterns (TWoRJTWoT, Ch. 31).