The purpose of the survey was to determine the attitudes and opinions of the membership regarding integrating males into the Ajahs and females into the Companies. Integration on TarValon.Net would mean Male Aes Sedai and Female Gaidin. Several related questions, as brainstormed by the Hive Mind, were asked. Hive Mind members met September 22 - October 11 2013 with the sole purpose of creating questions to be used for this survey. Many thanks go out to the Hive Mind members: Dravid ter'Mand , Elorenya d'Rahien, Deleios Cherchenuit, Erin al'Denael, Marivea al'Corriyi, Morrighan Daghdera, Anirfyan Dayen, Charis Delphi, Kelgan al'Moranwin, Raam Sho'am, Azi al'Thone, and Gedhan Audax.

As the chart below reflects, the largest membership group to participate in the survey were Aes Sedai followed by Gaidin.

The Green Ajah was the most represented with Red Ajah being the smallest and the others rounding out the middle. This is to be expected due to the size of the Ajahs. For the Companies, Dai M'Hael and San d'ma Shadar were almost evenly matched in representation with Mahdi'in d'ma Dieb and Val'Cueran showing less participation. 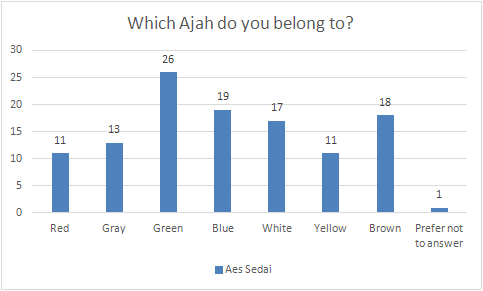 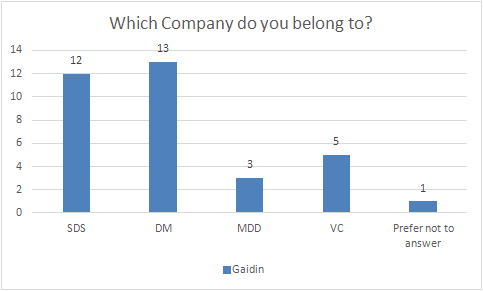 The “Big Question,” and focus of this survey, is if members would like to see integration happen at TarValon.Net. Looking at the totals across all membership groups, the answer is yes. 117 answered yes, 51 answered no, and 24 preferred not to answer. It should be noted that many indicated that their selection of “prefer not to answer” signifies that they hold no preference rather than not wanting to give an answer.

Hand-in-hand with the big question is how likely members will remain with the community if gender integration is implemented. The majority of participants indicated that they will, in fact, stay. This is consistent across all membership groups

Results are more divided as to whether participants think gender integration is likely to attract new members or previous members who have left the community. 36 think it is very likely and 60 think it is somewhat likely. 52 are neutral on the question while 26 find it somewhat unlikely and 14 think it to be very unlikely.

Part 3 - Current Use of Private Forums

Before we can explore how frequently members think they would use private gender integrated forums, we must look at the current usage of private forums as they exist now.

42% of Aes Sedai use their Ajah’s private forums daily, and 40% use them weekly. 9% check in monthly and only 3% check in only a couple times a year. 2% say they never use them.

The breakdown for Gaidin private forum usage shows a different result. 26% use them daily and 41% use them weekly. 15% check in monthly with the same amount using them only a couple times a year.

When it comes to gender segregated areas such as the Aes Sedai/Gaidin forums, only 15% of Aes Sedai check them daily, and 27% check weekly. 19% visit monthly with 29% only a couple times a year. For the Gaidin, 12% check daily, 18% weekly, and 24% check monthly. 26% only visit a couple times a year. Overall, these two membership groups visit these particular forums mostly a couple times a year (29%) with weekly (25%) and monthly (20%) following behind. Only 14% visit daily while 9% never visit. 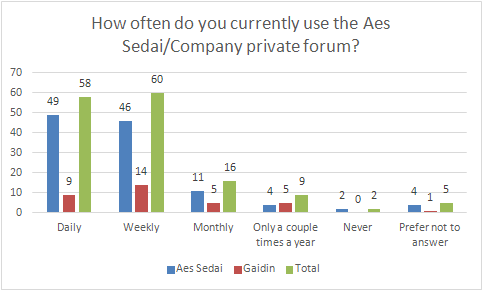 The survey also asked Accepted & Novices, and Soldiers & Recruits about their usage of the Dormitory and Barracks. Most Accepted & Novices visit the Dormitories monthly (25%) with weekly trailing behind at 18%. 14% check daily, and 11% check only a couple times a year. 11% say they never check.

Soldiers & Recruits either visit the Barracks weekly, or only a couple times a year (25% for each). 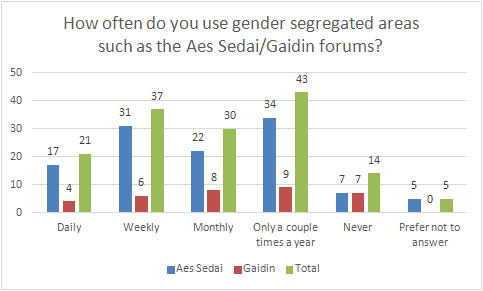 These results tell us that the Ajah and Company private forums get used more often than the gender segregated forums. For the Junior Members, they use their gender segregated areas on a more weekly and monthly basis.

Part 4 - Comfortability and Use of Integrated Private Forums

The survey also explored how comfortable the members would be with the opposite sex in private forums such as the private Ajah and Company forums. This question was asked to every membership group including Citizens/Resident Citizens.

The majority of Junior Members reported that they would be very comfortable with integrated private forums. 59% of Accepted, 83% of Soldiers, 0% of Novices and 50% of Recruits.

Citizens and Resident citizens are 60% very comfortable and 40% are neutral.

The chart below shows the breakdown of answers from all membership groups as well as by gender. 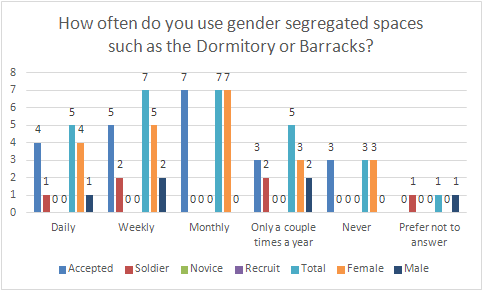 Likelihood of use increases among the Junior Members. 68% of Accepted and 83% of Soldiers are very likely while 33% of Novices reported the same. 60% of Citizens also reported they are very likely to use these forums. It is interesting to note that 100% of Recruits selected neutral.

This chart reflects the total breakdown of the likelihood of using gender integrated forums.

The survey continued to explore how and where Senior Members would hold conversations with other members. We asked how likely they would take conversations off the site to other venues (such as Facebook, Google Plus, Twitter, etc.) if they lost access to the currently gender segregated Ajah Chembers/Company Chambers forums.

A similar question was asked of the Senior Members regarding the Aes Sedai parlor and Gaidin Clubhouse forums. 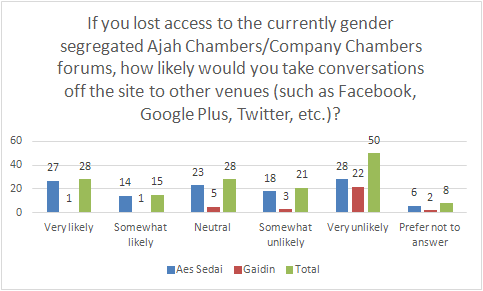 Most reported that it would be very unlikely that they would take their conversations off the site if these areas became gender integrated.

These charts indicate that use of private forums would not decline significantly if they became integrated, nor would the majority of people take their conversations away from the forums.

Senior Members were also asked about how comfortable they would be with a Head of Ajah or Company Commander that is of the opposite sex. 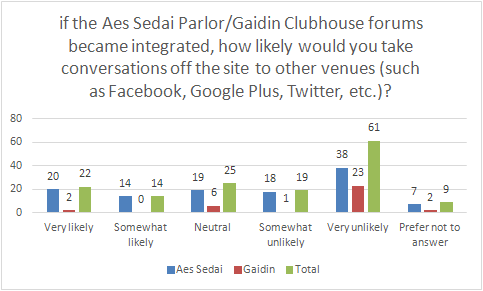 This chart reflects that the majority are very comfortable.

The survey asked a series of questions specific to Senior Membership.

If gender integration occurs, should Senior Members be allowed to switch to a different path? Responses indicate that switching should be allowed with a demotion first.

The survey also asked if the Ajahs and Companies had gender segregated forums in addition to integrated forums, what is the likelihood that participants would post in their gender’s forum. Most reported that they are very likely to do so (24% very likely, 12% somewhat likely). 25% reported that they are either somewhat unlikely or very unlikely to post in their gender’s forum.

If private Ajah and Company forums existed for men, women, and/or both together, the survey asked if participants would feel excluded from the other gender’s forum. This resulted in an interesting split. Where 54% of Aes Sedai said no, 53% of Gaidin said yes.

This was followed up with a question on if the Ajahs/Companies had gender segregated forums, would the Senior Members prefer limitations to ensure participation in the integrated forums? Again, this resulted in an interesting split.

Most Aes Sedai reported that they would not like limitations. However, only 35% of Gaidin responded no. 29% of Gaidin preferred not to answer (which may indicate a neutral stance) while the latter 35% do prefer limitations.

Gender integration would be a significant change in the community. Senior Members were asked if they felt that integration would change the dynamic within their Ajah/Company. This resulted in yet another interesting split. 67% of Aes Sedai answered yes while 68% of Gaidin answered no. 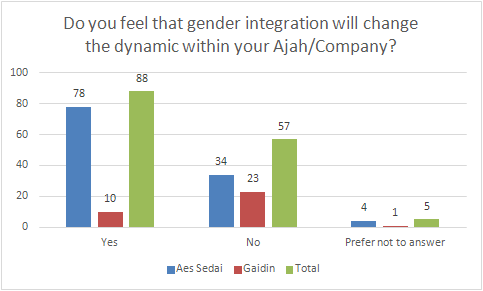 This was followed by the follow-up question “will this be a positive or negative change?” Out of the participants who chose to fill in this question: 44 said positive, 33 said negative, 31 and either didn’t know/were unsure/no change. It was an open ended question that allowed participants to provide feedback. Below is a list of more common comments as well as a mix of other opinions.

Should the junior membership should be integrated as well? 59% said yes with 29% saying no and 12% who preferred not to answer.

Participants were asked if the mentorship program should be altered as well. 54% said yes and 32% said no.

This was followed up with a question asking what the mentorship program should be altered to: mentorship from both a Male Aes Sedai/Gaidin or Female Aes Sedai/Gaidin or mentorship from the same gender as the mentee. 24% said both a male and female while only 4% said the same gender as the mentee. 24% indicated another option. Many of these other suggestions were for an Aes Sedai and a Gaidin mentor regardless of gender. Other suggestions included:

In addition to mentorship, guesting was also queried. 72% said that yes, Accepted and Soldiers should be allowed to guest with both paths before selecting. 23% said no with 5% preferring not to answer.

43% felt that a Junior Member should declare their path selection before aspiring. Trailing behind this was the option to declare before being raised to second level JM (25%). 8% felt that after a certain amount of time as a JM was appropriate. 9% gave an alternative answer.

Junior Members were specifically asked if they were willing to have a mentor of the opposite gender and/or of the opposite path. 67% overwhelmingly answered yes- from either path. 14% said yes, but from their chosen path only. 11% said no. 8% indicated another option.

There are several issues that would need to be resolved if gender integration is implemented at TarValon.Net. The survey asked if new Ajahs and Companies should be created solely for the purpose of integration (as opposed to integrating established Ajahs and Companies). The majority (78%) said no. 15% said yes with 7% preferring not to answer.

If integration does occur, did participants foresee the companies rendered obsolete? The overwhelming response (79%) said no.

Participants also overwhelmingly indicated that members of the same gender should be allowed to bond.

Part of looking ahead included asking the Citizens and Resident Citizens if they were more likely to join the Tower and work towards Senior Membership if gender integration is implemented. Only 5 responses were given. 3 said yes while 1 said no and 1 other preferred not to answer.

Citizens were also asked if they were offered to join either the Aes Sedai or Gaidin path how likely they would be towards working to be a Senior Member. 4 responded very likely and one indicated that they are neutral. Part 8 - Final Comments The results of this survey indicate that many would like gender integration and will most likely stay if it is implemented. A slight majority would be comfortable with integrated forums and even an opposite-gender HoA/CC. However, most Senior Members are not looking to switch paths and feel that this change would affect the dynamic of their Ajah/Company. More participants feel this change would be positive, but there are quite a lot who feel it would be negative or are unsure how it would affect their group.

Quite a number of participants left additional comments at the end of the survey. Below are a sampling of what people had to say: