Miya is an Aes Sedai of the White Ajah. 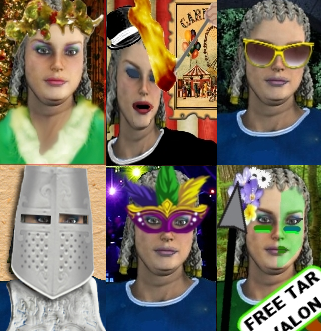 Believe it or not I really knew NOTHING about White when I guested. I asked in every ajah I visited "why not the other ajahs" to learn about them; every ajah seemed to have no real grasp of what it meant to be white. Because of this I was DETERMINED to learn more so I could share it with others regardless of what ajah I ended up in later.

What I found was that the Whites are survivors - like me. We're women who have seen things and/or been through things that could make or break a woman; but we're forged by our experiences not defined by them taking in the lessons we've learned and adding them to our rainbow of colors (iridescent like a bubble or prism you might say) which make us who we are.

We are as quick to tell someone when to suck it up as we are to pass on the logic and wisdom we've gained to others in need. Like the color white, we're a bit of whatever we need to be - jacks of all trades standing steadfast and ready (or white hot and ready, if you must) to do what needs to be done. We're women with a wide variety of skills and talents (or wide streaks of other ajah colors if you will) and so for an outsider it can be hard to say "this is what white really is." But if you are one, like me, when you come to spend time with us you'll just *know* that you're finally home and no other choice of Ajah would be logical.

A silly question. I know there are some very cool cucumbers in the White Ajah but no one is without emotion (well, no one with a conscience anyway) Logic is nothing without emotion because emotion is part of a life's experience. To deny your emotions would not give you a true perspective on life or other humans around you - and any conclusions reached without the benefit of emotion would be incomplete (in my opinion.) I think, like the Whites in the Books, I do try to learn from my experiences and observations and put what I discover into practical application in daily life ... but no, I'm not a characture or stereotype by any means. I fear I love pranks far too much for that.  :look

Egads tough one because White doesn't get the face time that some of the other ajahs get. It would either be Carlinya (whom I'm pulling for a shocker on in the last book - could it be she returns somehow?) or Black Ajah (turn Forsaken Hunter) Seaine. Both women do a lot for the image of the whites in the books I think.

My Husband (then fiancée) begged and begged me to read "Eye of the World" but I was distracted by other hobbies and such at the time and just never picked up the book. One day while sick he opened it and began to read aloud to me stopping after the "Weap of Manetheran" scene and I about flew off the handle asking if we could keep going. After him finishing EotW out loud to me, we took turns reading the rest of the books to each other (him a few chapters then me a few chapters) and we've done that ever since and all the way through. Now that we have a daughter, reading WoT has become a family affair.

A tough call. Lanfear I suppose but maybe not so much for how good of a bad guy she's been but my deep desire to see her pull something in the 13th hour which redeems her. I'm a sucker for that sort of story.

A few quotes so I don't spoil the scenes. "KNEEL BEFORE THE LORD DRAGON OR YOU WILL BE KNEALT!" "Weap for Manetheran." Matt screaming his victory rants over the captors who held a very popular female character prisoner for many books... and also the look into life at the Kandori Tower in Towers of Midnight - that was incredibly well written and made me immediately feel for these characters who we knew so little about.

Ebou Dari Innkeeper maybe (give me a marriage dagger and teach me to duel already that sounds like fun!) and member of the Kin women or Domani Merchant. I know the One Power would be rockin' fun to have and Ebou Dar would be fun to live in but I could see myself digging the idea of traveling country to country each year using my wits to make the bigger bucks!

I originally was a member of Dragonmount.com for quite a few years and met Arie Sedai of the Gray Ajah who was always begging me to join. Eventually, after becoming a stay-at-home mom I decided to give it a whirl and I found that I had a lot to offer in the community and that the friends I made gave a lot back to me. I came for the fandom and stayed for the friends, I suppose is the best answer.

Right now I'm a stay-at-home mom but I'll probably go back to working after my daughter starts school. For the moment I've been working on a romance novel (which I recently finished writing) and now I'm starting on a young adult sci-fi book. It's my desire to become a published author sometime in the relatively near future.

Anything artistic really makes me happy - I do sketching, graphics alterations and manipulations, acting, I sing (poorly) but if it's creative I generally find it to be fun and spend time on it. I'm also a roleplayer so I spend time playing table top games, LARPing and occasionally I can be found taking part in playing World of Warcraft with my husband.

Yes thank you. That is to say I don't know that there is a kind of music I dislike... maybe screaming death metal and some of the darker/harder that was popular in the mid 90s? Really though just about anything makes me smile and shhh! Don't tell but I also have a bit of a secret love affair with disco music and I'm a HUGE Within Temptation fan.  :giggle

Again the list is somewhat long and probably match some of what you guys like here. I dig the reboot of the Star Trek franchise they did in 2009, Princess Bride, Boondock Saints, Pride and Prejudice, P.S. I love you, most superhero movies in recent years have been pretty good too. As for TV I like Once Upon a Time, Merlin, The Walking Dead, Star Trek TNG, Babylon 5, Game of Thrones, House, True Blood, a few reality shows like Hell's Kitchen and The Biggest Loser.

Stephen R. Lawhead's Arthurian Series but I really think Taliesin was the best in that one, Count of Monte Cristo, Snow Flower and the Secret Fan, and probably more romance novels than I care to admit to.  :look

First I think Ballet Dancer. I walked on my toes for YEARS (to much ridicule and taunting by other children) and then I realized I'm a short and curvy girl so... yea. Then lawyer (I love to debate) and then author. While I started college to go into broadcasting/theatre I never lost my love (or stopped) writing. Now as an adult I've decided to make a go of it and see if I can make a writing career take off.