Difference between revisions of "Venric Methalion" 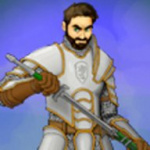 Who is your favorite character? Favorite nation?

Perrin, and probably either Shienar or Andor.

How were you introduced to the series?

I was looking for something new to read during some slow days at work, and Karaelyn suggested it to me.

Perrin. He’s far and away the one I relate to the most.

I really enjoyed The Shadow Rising and The Fires of Heaven. My favorite scene would probably be the cleansing, followed by Dumai’s Wells and Perrin forging Mah’alleinir.

Some form of craftsman, maybe a carpenter or blacksmith.

Asmodean; he proved adaptable and felt more fully-developed. Sammael seemed too straight-forward, and easy to manipulate or predict.

I met some of the senior members at Dragon*Con and joined the site shortly after. Initially I joined to discuss and theorize about the series, but my interactions with the other community members made the site feel like a good fit.

Have you ever attended any Real Life Functions? Did you like them if you did, and why? (Why do you think people should come to any future functions?)

Several, all of which have been enjoyable. It’s nice to interact in person with the people behind the avatars that I spend so much time discussing things with.

What language(s) do you speak?

I like to draw and build things. When I’m not doing that, I enjoy most forms of gaming and any form of storytelling.

Two cats: one calm and one insane.

The Lord of the Rings tops the list of other fantasy. In the last decade I’ve probably read more comics than books; Fables and Garth Ennis’ run on The Punisher (MAX) are my favorites.

What is the craziest/stupidest thing you've ever done?

Why would you think I’ve ever done anything like that? What...what have you heard?

Party or lounging at home?

One night, a girl’s voice awoke me from my sleep. She telepathically pled: “Help me… My name is Zelda… I am in the castle dungeon.” I jumped out of bed, not knowing whether the voice was part of a dream or reality. Upon leaving my bed, I found my uncle, who should have been fast asleep at that time, preparing to go out, girded for battle. “I’ll be back by morning,” he said as he departed. “Don’t leave the house.” I watched him leave with the family sword in hand and shield on arm. That night was like no other...Who was Zelda? Where had my uncle gone, and for what reason? And so, on an ill-fated night, a new chapter in my life began…