Andor is a wealthy nation with exports such as wool, precious metals, ironwork, tabac, and grain. It has a strong army that consists mainly of the Queen's Guard. The capital city, Caemlyn, is said to be second only to Tar Valon in beauty. The New City was built more than two thousand years ago by human effort alone. The Inner City, however, is ancient with much bearing the mark of Ogier stonemasons. Most of the official perimeter of the city is encircled by a great fifty-foot wall of silver white, broken only by tall round towers flanking massive arched gates. The Palace, which sits atop the highest hills in the Inner City, is the seat of government for the nation of Andor.

Unless stated otherwise, all information herein is taken from TWoRJTWoT, Ch. 27.

Andor is not only the largest nation of the land, it is also one of the oldest, with its formation as a nation occurring soon after the death of Artur Hawkwing. The first Queen of Andor was Ishara, daughter of Hawkwing's governor Endara Casalain and granddaughter of the last king of Aldeshar. She joined with Souran Maravaile, Hawkwing's greatest general, taking control of the province from her mother and turning it into a nation. It was during the reign of Queen Ishara that Andor's traditional allegiance with the White Tower was formed. Her marriage to Souran Maravaile gave her his army and broke the siege of Tar Valon. Queen Ishara's eldest daughter was sent to study in the Tower and Aes Sedai, and Ballair became the first Aes Sedai to be advisor to the Queen of Andor. Unlike many of the other nations that formed in the early days of the War of the Hundred Years, Andor expanded slowly, only claiming what they could actually control. The town of Four Kings dates from the period, when four of the other kings sent armies against Maragaine.

The tradition of only a Queen, never a King, sitting upon the Lion Throne and wearing the Rose Crown also stems from this period, when the male heirs would often be killed in battle. 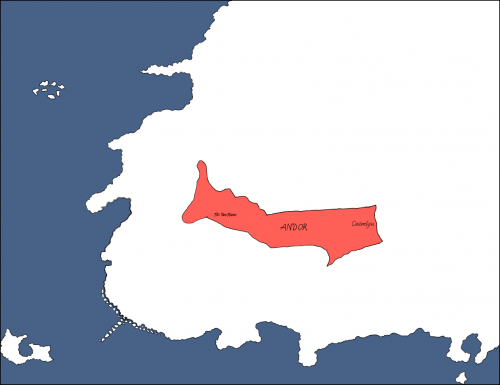 During the time of the compact of the Ten Nations, parts of Manetheren and Coremanda made up what is now Andor. Following the Trolloc Wars, the nations of Farashelle, Aldeshar, Caembarin, Nerevan, and Esandara occupied the land.

The Two Rivers is a region in the far west of Andor that has long been out of the control of the central government, so much so that most people there do not even know they are part of Andor. They had lived without nobles for generations until their people chose Perrin Aybara as their lord after he led them to successfully defend against a trolloc incursion (TSR, Ch. 56). This was later confirmed by Elayne, who agreed to keep the status of the Two Rivers much as it was before, except that the land would be granted to the Dragon Reborn (ToM, Ch. 47).

Andor is ruled by a queen, whose daughter, known as the Daughter Heir, will follow on her death. If there is no Daughter Heir, the throne will pass to the noble with the most direct lines to Ishara (TWoRJTWoT, Ch. 27). The passing of the throne to the daughter heir is usually a formality, but does require the assent of a majority of the Great Houses. The office and throne are commonly known as the Lion Throne.

Occasionally, there is no daughter heir and no clear individual with the strongest claim. In such situations, several houses may try and claim the throne, and this can result in civil war between the rival claimants. There have been several incidences in Andoran history, but two have particular significance.

Late in Morgase's rule, Andor was on the verge of rebellion, with many people feeling that Elaida had too much influence. This feeling was compounded when Rahvin took over and made Morgase mistreat and exile many of her supporters, such that many nobles no longer wanted to see a Trakand on the throne. The great houses coalesced into three groupings, one behind Elayne, a second supporting Arymilla Marne, and a third neutral faction. Following Arymilla's defeat at the siege of Caemlyn, those of her supporters that were not irreversibly committed, declared for Elayne and shortly after, the majority of those who had remained neutral did so also (This passage needs a reference). The houses that had led opposition to her, Arawn, Marne, and Sarand were stripped of land and titles, with their estates given to Cairhienin nobles to bind them to Elayne (ToM, Ch. 50).

The Andoran elite military has been the Queen's Guard. They have gained access to weapons powered by gunpowder (ToM, Ch. 19), which they intend to keep out of the hands of other nations, giving them a large advantage.

Cities, towns, and villages in Andor

Many Feasts and Festivals are celebrated in Andor. These include Amaethon, Bel Tine, the Feast of Abram, Feast of Fools, Feast of Light, Feast of Maia, Feast of Nemen, Shaoman, Shearing, Sunday, and Winternight (The World of Robert Jordan's "The Wheel of Time", Chapter 31).

The clothing of Andor is not known to have any distinguishing features. Similarly, the people do not have namy common traits, though they are usually pale skinned. In some regions, such as the Two Rivers, hair and eyes are dark, but this is not the case everywhere (The World of Robert Jordan's "The Wheel of Time", Chapter 27).

Many foods are known to be eaten in Andor.