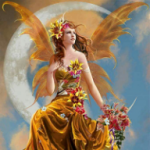 My favorite protagonist is Nynaeve. I like that being the strongest wasn't just handed to her. She had to work past her block. Favorite antagonist is, hmm, Lanfear. She's nuts.

I love when the girls rescue Egwene from Falme. When she punches Seta in the face. And probably Eye of the World.

I'm really not sure, but probably just a normal person. If I could chose of course I would want to be an Aes Sedai though.

I was looking for somewhere to talk about the books when I was in college, so to the internet I went!

How was your time as Citizen/Novice/Accepted?

My first time around, I rushed through it but I had a group of friends that I loved. We all went through the ranks together. My second time through, most of my closer friends had moved on so I had to make new friends. I took my time and made sure I felt at home when guesting.

If you have attended any Real Life Functions (Official or Unofficial), do you recommend that people come to any future functions? Why or why not?

I've been to 2 Anni's. I honestly have no complaints. The events really have grown with the community, so naturally the one I went to in 09 was different than the one in 15. I had a good time at both though!

I am now in Customer Service but was a long haul trucking dispatch we for the last 3 years.

Honestly, I wanted to be a Fighter Pilot.

English and a little French.

Mercedes Lackey's Obsidian Trilogy, most stuff by Gaiman, must stuff by Sanderson, and Lord of the Rings. I'm trying to break out of the fantasy realm at the moment.

Lord of the Rings, What We Do in the Shadows (show and movie), The Boys, Supernatural, Marvel movies, Schitt's Creek, Arrested Development, the Office, Parks and Rec. I am more of a TV person than movie person.

Pop, Rock (alt and classic), musical scores. I like a little of everything.

Tea or coffee? Seanchan or Shara? Verin or Adeleas? Board games or computer games?

What is the craziest/stupidest thing you've ever done?

Filmed myself spraying my cousin with pepper spray in college.

A short bio about yourself

Oh no. I'm bad at talking about myself unguided. I'm a nerd. Books, TV shows, movies, anime, games, etc...I do whatever makes me happy.