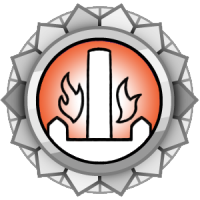 One of the Merit Badges introduced in March 2011. It falls under the "Online Spirit" category and is a silver merit. It can be earned after being nominated for performing an Epic Prank.

Because it cannot convert to Gold, it is one of the merits that applies towards the Alchemist Merit. To nominate someone for this merit, email your nomination and a reason why you are nominating them, to archivist@tarvalon.net.

Blowing up the Tower

Redecorating the Mistress of Novice's Office with barn animals

Setting the Guilds on fire during 8th Anni

Up to no good