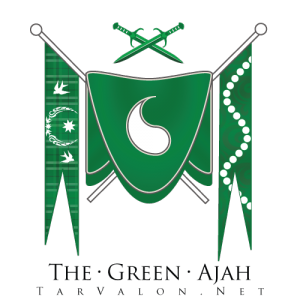 Head of the Green Ajah

The Captain General or Head of the Green Ajah is responsible for the administration of the Green Ajah group and forums.
She is the point person for any activities, changes to the group, and moderation of the Ajah. Her title is the same as the one in the books - Captain General. She is also the Ajah representative to the rest of the TarValon.Net Adminstration, handling issues such as Raisings, member maintenance, and disciplinary matters when they arise. She oversees Guesting requests from Accepted members, maintaining the group information database, and tracking of Accepted projects and Aspirant information. The Green HoA has a small staff of ladies that assist in the day to day running of the Ajah - the Heart, the Head Ibis and First Green Monkey. These ladies all interact with the HoA and help keep her in the loop on “what’s up” in the Ajah, from online event planning, to Green chat events, and the overall pulse of the Greens. At Tower functions at which the HoA is present, she presides over the distribution of the traditional Green Beads and Balefire, and starts out the Green toast. She also helps coordinate procuring Shawls for ladies that will be Raised at Tower functions.

Captain General aka Head of the Green Ajah

Past Heads of the Green Ajah

Heart of the Green Ajah

The Heart of the Green Ajah's primary duty is to be active and present, ready to assist with whatever the Head of Ajah needs. All of their other duties can pretty well be summed up in that statement! This can include, but is not limited to, maintaining google docs relating to the Ajah, welcoming new guests, coordinating the Big/Lil Green program and moderating the Green forums.

Heart of the Green Ajah

Past Hearts of the Green Ajah

Green Sitters of the Hall

First and foremost, a Sitter has to be willing to put pride aside. You may not agree with everyone, but you have to leave snarkiness behind (save it for CE ;) ) and work with your fellow Hall members. Who you like personally should not factor into any of your votes. You must be fair and always present.


Sitter is a wonderful way to contribute to the Tower without committing too much time or having a lot of computer knowledge. Its fun, and a chance to get to know a few people you may not have otherwise.

Current Sitters of the Green Ajah

The Head Monkey is responsible for the creation of graphics and organising Green Ajah themes with the rest of the Ajah for site-wide online events. The Head Monkey also coordinates participation and Ajah specific threads in site-wide events. This position is retired and we just have monkeys now.

The Green Monkeys create graphics and think of themes for site-wide online events and Ajah activities.

The Green Librarian is charged with keeping the Green HQ wiki pages up to date. If there are any changes requested by members of the Green Ajah they can either complete them themselves, or request changes through the Tower Historian.

The Ibises contribute ideas and write articles for inclusion in the newsletter.

Green Ajah Clerk
This position has been added to the Heart of Ajah duties.

Green Contributions Coordinator
This position has been added to the Heart of Ajah duties.

Big/Lil Sisters Coordinator
This position has been added to the Heart of Ajah duties.