Author: Toral Delvar
Unless stated otherwise, all information herein is taken from The World of Robert Jordan's "The Wheel of Time", Chapter 30. .

Ghealdan is a relatively small nation.

An entry appears in the Wheel of Time Companion for this article but no information is available in the main story arc. 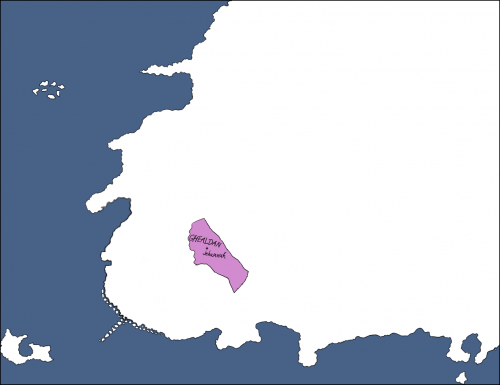 According to the maps, Ghealdan is entirely made up of land formerly claimed by Dhowlan. Most maps show it as taking most of that land, but others shows it as taken virtually all, with essentially none of the land having been part of other countries. Apart from a small part of what was Eharon during the time of the Compact of the Ten Nations, the land that is now Ghealdan was part of the nation of Manetheren (TWoRJTWoT, Ch. 10; TWoRJTWoT, Ch. 15)

Ghealdan lies between Garen's Wall and the Mountains of Mist, bordering Amadicia to the south along the River Eldar and Altara to the east. To the north lie the Forest of Shadows, the Manetherendrelle and a short, almost impassable border with Andor

Ghealdan is a monarchy, ruled from the Jheda Palace. In recent times, Ghealdan has been very troubled. The false Dragon, Logain Ablar, arose there and gathered an army, only being defeated when Aes Sedai came into it. The losses in this conflict were severe and it all but tore the country apart (TGH, Ch. 4). Shortly after this, before the country had time to recover, Masema Dagar arrived from Almoth Plain and began to preach the Rebirth of the Dragon (TDR, Ch. 33). What order there was collapsed as men and women flocked to him and leader after leader fell trying to depose him (TFoH, Ch. 39).

Ghealdan has undergone several monarchs in recent years. First King Johanin died mysteriously, then Queen Ellizelle died of supposed suicide after failing to disperse one of Masema's mobs. Queen Teresia lasted ten days before being forced to abdicate to marry a commoner. Finally Alliandre took the throne and managed to maintain some degree of control by giving Masema almost free reign (TFoH, Ch. 39). To try and secure the future of the country, she wrote first to Rand al'Thor, asking for his support (LoC, Ch. 28) and later swore fealty to Perrin (TPoD, Ch. 10) and followed him to Abila, where she was taken by the Shaido (TPoD, Ch. 30). After being rescued, Perrin told the Seanchan who helped that Ghealdan is under his protection (KoD, Ch. 30).

The main military group in Ghealdan was the Legion of the Wall. This has been dispersed.

Many of the towns in Ghealdan are walled and contain buildings made primarily of stone and roofed with slate. Large towns typically have buildings of several stories and some even contain palaces.

Cities, towns and villages in Ghealdan

Note: Towns with an asterisk are located in either Ghealdan or Altara.

People in Ghealdan are often wary of strangers.

Little is known of the dress and appearance of Ghealdanin, though they tend to be dark of hair and eye.