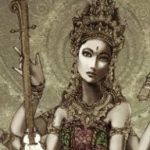 Hmmm. Well I’ve been around the tower since about 2004 and I’ve been around the block, as my Who’s Who page can tell you. I ended up in Brown, because the Ajah fit me. My impression of the Browns was that they were chill and laid-back, with a wicked sense of humor – this pretty much describes who I am in RL.

I love learning new things and knowing random stuff, like philosophy, scientific weirdness, and all of the gossip. My quest for knowledge is all-consuming hunger; I have to know all of the things! Why? So I can put it all together in my head and extrapolate ideas for my amusement. My Ajah sisters accept all aspects of me and aren’t afraid to tell me exactly what they think, good or bad. It’s a drama- free and non-spammy environment.

Basically I’m Brown, because it is where I can be myself.

As surprising as it may be to some people, I am a lot like the Browns in the books. I do my own thing, evidenced by my eclectic research and interests. I love reading books and I do daydream quite a bit. I can get really passionate about my research, sometimes ignoring inconsequential things like food and sleep if something really interests me. I remember reading in New Spring, that the Blues viewed the Browns as letting the talents of their Ajah members go to waste by allowing them to do whatever instead of using them for the good of the Ajah. I want to do whatever I want, in the way that I think is the best, not in the way that someone else thinks is best.

I know the traditional answer is Verin, and I do love Verin. My favorite, however, has to be Saerin. She’s got a volatile temper, isn’t afraid to gets into fights, isn’t afraid to voice her opinion, and takes charge of a situation when she deems it necessary. Saerin also likes to get to the bottom of things, and can be single-minded about that, particularly when something has piqued her curiosity. She’s basically like me, and I love me.

I had a few weeks of downtime over the summer between 9 th and 10th grade. My family was moving in 3 weeks, so I wasn’t enrolled in any activities. One of my friends gave me the WoT books to eliminate my boredom. I finished Books 1-5 in those 3 weeks.

Tuon. She’s an Empress with an odd sense of humor who is amazing at manipulating people. Plus, she’s pretty awesome about actually knowing her subjects.

The Dark One. It makes sense that one of my favorite characters would be the one I’m most like.

It was just after Crossroads of Twilight had come out. I was looking for information on the next book and found TV.net. I’d never been on forums before, so it was a new shiny to play with. I met some very awesome people at a local event in my first month here, including my first-sister Allin, plus I got a new procrastination tool! I stayed because of the people.

If you ask me details about my RL work, I will likely talk about it for a minimum of an hour (Editor's note: make that three hours).

Anyone who even remotely associates with me knows that I love sports. I love watching, playing, coaching sports. I used to do marathons/triathlons, play soccer, and figure skate. I enjoy playing the piano, playing rock band, and punching people in the face.

According to Raam, bad music. In actuality, I love most rock music and electronica. I also love classical music and have season tickets to the symphony. ^^

Malazan Book of the Fallen, Lord of the Rings, 1984, Hitchhiker's Guide to the Galaxy, Stormlight Archive

Originally I wanted to be a doctor that takes out babies, but then when I learned what was involved I decided that I’d rather be a neurosurgeon.