Ariadne Davion, an Aes Sedai of the Yellow Ajah. She is Married to James Davion, mother to Samantha Lynne, and James Doneavan. 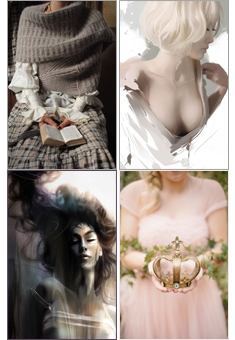 Why did you choose Yellow?

In my journey through the Ajah's I learned a lot of what I am, what I saw myself as and dove deeper to try and understand where that core was. I will be the first to admit that I resonate with all the Ajah's in some way. I always have. I even resonate with 1-2 Companies, though I clearly am drawn most strongly to SDS (the group I chose Yellow over). Causes, choices, actions. At the core of them, at the core of me, is Love. I fight battles that aren't always my own out of Love. I seek to find balance and common ground out of Love. And that Love is selfless.

What brings me the most joy in life is making others happy. To help make things better, to fix what is broken; be it a website, a relationship, a hurt soul. It all starts to pile up and after reflecting on what that was for me, Yellow became a no brainer.

Are you like the Yellows in the Books? Do you care for people and love to heal things?

I am, and I am not a book Yellow. It would be more accurate to describe me as a book Blue or Red.

Though, I have a bit of every 'Ajah' dispersed in my personality. Some good and some bad. I am Blue in my drive for a cause and justice. I am Brown in my OCD for books, order and my general love of the written word. I am Green in my fierce loyalty to my sisters and I will draw swords to protect what needs saving at the cost of my life. I am White in my addiction to philosophy and and the more worldly questions that question the mind and challenge how we live out lives as a whole. I am Yellow in my ability to heal the Soul, support and aid in ways that sometimes defies the laws of medicine or even logic. I am Red in my fight for a stronger world by protecting Humanity with making the decisions that are hard to make. And last but not least I am Gray in my hope for peace, good will and an understanding of others that are far different than myself, even if my views are different and do not agree with theirs.

Do you have a favorite Yellow Ajah character from the novels?

No, not really. I didn't connect much with the Yellow's in the books as I am not a physical healer.

I have been a fan of the books since 2000, and about that time is when I stumbled onto Dragonmount.com which was the start of my internet book-cult craze.

A [ex-]boyfriend actually got me interested in Fantasy. Wheel of Time was just one of many series that wet my tongue in this genre. This was way back in 1999-2000. I joined another WoT site and it pretty much cemented my love for the world. I read up til book 4 when I put it down for many years even though I was still 'very' active in various communities. I did not complete reading it, however, until 2007 and then once again in 2009 when TGS was released. I delightfully await the next edition.

At first Siuan and Egwene were my favorite, and while they still very much are I have also grown to love Galad. Not for the typical 'too cute' kind of aspect but because I find that he is the one character that i can't entirely predict. He surprises me and with each book I have grow to add him into my list of favorites.

Graendal, as she is me without morals. However I have found that I don't like the way she's been written by Sanderson but I can forgive him as we're still getting the end of the series.

I think my favorite scene, as hard as it is to pick out, is in The Gathering Storm where Egwene speaks before the hall and appoints Silviana as her Keeper. I always go back to it because of the impact that it made, and the tone set for the White Tower. That, and they deserved it and I'm glad someone told them off.

Aes Sedai of the Blue Ajah, unless I am unable to channel, then possibly a crafter or one of the library Keepers in Cairhien or Andor. Unless I felt -really- brave I'd try and petition to join the Tower Guard and maybe be a Warder.

I am a "stay at home mom", but professionally I'm a Web and Graphic Designer. Or at least that is what I went to school for. I want to be a writer, and I want to work in management in a good company. I have learned that I really like working with people and managing projects and people. In that way, I take after my mother who went from Accountant to Project Manager for a different company. I hope to stay as versatile in that regard.

Many!! I write Post-by-Post Roleplay, Knit, and Crochet. I'm learning to be a better cook but am more successful with baby food as my daughter seems quite forgiving and eats everything I put in front of her. I also Roleplay Pathfinder with friends on the weekends with my husband.

My taste in music is rather eclectic. I am more likely to have a favorite sound than band preference. World, Poetically Dark, Ambient, Goth, Opera, Lyrical.. If you want a Playlist, you won't have enough room here.

Once Upon a Time, Merlin, NCIS, the HGTV & Cooking Channel. My TV watching varies. My favorite all-time movie is Ever After, with How to Train Your Dragon as a pretty close second.

I wanted to be a Vet but then I had this fear of blood. Then I wanted to be a teacher and spent time at summer camp and decided against it. Since then I still aspire to be an Author.