Sela Narian is an Aes Sedai of the Brown Ajah with nearly two decades of Tower membership and several staff, admin, and executive administration contributions. In the past, she has served as Head of the Brown Ajah, Director of Communications, Editor of the Tar Valon Times, and multiple other staff positions. IRL, she is a writer, editor, and educational designer, working in the software industry. She is working on two novels (twelve novels) (two hundred novels) at the same time and is determined to be published eventually.

She performs at conventions in the Wheel of Time group, The Flaming Sisters, with Eleyan Teyal Al'Landerin, singing songs they co-wrote. Sela is also the creator, writer, and director of The Wheel of Time Interpretive Dance: The Eye of the World, an insane show that has performed multiple times at Dragon*Con and JordanCon.

Sela is first-sister to Ne'Mireth Delvar and sister-in-law to Toral Delvar. She exists as one half of the HinJew, a supernatural synthesis of Zashara Sho'am's and Sela's souls, which makes them both terrifying and magnificent.

She is the first non-Green Aes Sedai to bond three bondmates at once: the faultless Jadira Paerael of the Brown Ajah, the transcendent Morrighan Daghdera of Mahdi'in d'ma Dieb, and the phenomenal Melearlin Valar of the Blue Ajah.

I'm a writer of many genres, especially fantasy and romance. My main focus currently is an epic fantasy novel about a master painter struggling with artist's block, who works on a secret painting that starts a war among the gods.

My other main work is a young adult novel about a teenage girl who belongs to a secret time traveling guild. I'm in revision stages with it.

I previously worked as an editor over a decade. My favorite thing to edit was fiction, especially for developmental editing. I also edited lots of non-fiction, mostly academic.

I am obsessed with words in numerous forms and disciplines: languages, historical linguistics, etymology, history of the alphabets, fiction writing, poetry, essay writing, journaling, technical writing, graphic design of text, acting through expression of words...I could go on and on. I love studying the stories of words and letters.

I studied ancient languages and civilizations at the University of Iowa. I enjoy singing, acting, guitar, and piano. I taught a theater workshop for elementary school kids.

Suzanne Day was named in my honor to celebrate my birthday for weeks on end. My birthday is February 15. It's no better or worse than anyone else's birthday, so it's only called Suzanne Day and takes place around my birthday because I established it, rather like claiming the Latin name of a new species of rattlesnake when you stumble across it upon being cast into the desert like Moses and you just kicked a rock because you're pissed and hungry. THIS IS MY RATTLESNAKE. It is loud and showy and less deadly than it wishes.

Because I am so obviously Brown it's laughable to choose anything else.

I love books and do have a huge tendency to daydream. Yes, I'm like the Book Browns.

VERIN. Anyone who doesn't choose Verin is strange, I think. If I were in Randland, I feel my trajectory in life would match Verin's almost exactly.

Verin, Lan, and Egwene are my favorites. Favorite WoT antagonist is probably Moridin/Ishamael.

I had never caught onto fantasy books; mostly literature and romance. I bet a friend I couldn't read all nine books in two weeks. Took me ten days. Now fantasy is one of my favorite genres.

Honey in the Tea is probably my favorite chapter. It's in Knife of Dreams, from Egwene's perspective. Another is Verin's scene with Egwene in the last book. Favorite book is probably Book Four, The Shadow Rising. I also really love A Memory of Light.

I'm a content strategist for a software company, researching customer experience and designing educational resources to help customers set up their accounts.

Native English, half-fluent in French and Hebrew. Also studied Latin and Greek in university and am comfortable translating with a lexicon. I can eavesdrop to ineffective degrees in Italian, Korean, Spanish, and German.

TV: Babylon 5, Grey's Anatomy, The Man in the High Castle, The Good Place, Doctor Who, You From Another Star, The Princess's Man.

I have two spaniels named Sigma and Zephyr. They're the sweetest boys ever. 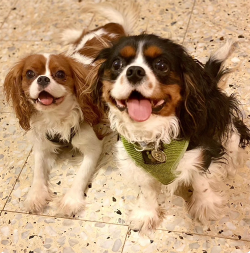 I enjoy both tea and coffee. I like making espresso drinks. It's similar to why I like cocktails, except no liquor.

I don't care about Seanchan or Shara either one; there's not enough known about both to compare.

Verin each and every day.

Board games or computer games?

I did not know what this is. I googled it and decided I wanted to continue not knowing.

Favorite member of the MCU?

Favorite role to play in mafia?

I don't keep track; that would require effort for way too many instances. It's a way of life.

What else would you like us to know about you?

It's okay; you don't need to know anything else about me.