Kitan is an Aes Sedai of the White Ajah. 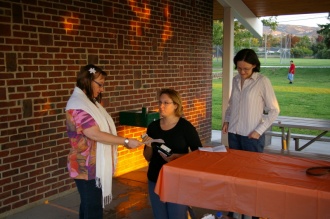 Kitan's raising to Aes Sedai of the White Ajah

White was the Ajah I'd "written off" inside my head when I began guesting. I didn't even consider it as a possibility. Me? Logic? Ha!

So I guested with all the other Ajahs. Several times. Eventually I decided to guest White just so I could say I visited every Ajah. And...White felt like home. But it couldn't be, I thought. Me and logic don't fit together.

And I came back.

And I came back again.

And I came back yet again.

I guested in White 4 times because I was sure it was a fluke that I fit. But eventually I realized that as crazy unlikely as it was, White was my home. Part of that is that I discovered that core of the Ajah isn't just logic: It's the search for truth. I'm interested in the nature of life, in how things work, especially on an emotional level. I'm a truth-seeker. I will change my opinion when I am presented with facts that show I'm wrong.

In the Wheel of Time Companion, the book members of the White Ajah are said to have "abstained from matters of the world and worldly knowledge, and instead devoted themselves to questions of philosophy and truth." So the idea of Whites not solely being about logic is actually canon.

Just about every White has gone through something very difficult in their lives. For me, it's complex post-traumatic stress disorder and the events that created it. I think that the fact that we've overcome significant hardships helps give us the desire to see the world as it actually is.

I went to 10th anni, and that was my first time interacting with Whites. Despite the fact that I was Accepted, I was immediately accepted (no pun intended) by all the Whites. I knew these were my Sisters. I'd experienced that feeling online, and meeting Whites in person cemented it permanently for me.

After discovering White and realizing it's my home, I've never looked back. I've never doubted. I'm a demotee, so I wanted to make sure the Ajah I chose was my true fit. And I found it. White is my home. This is where I fit. This is who I am.

I don't think I'd be a book White. Whether I like it or not, I have emotions...sometimes strong ones that I find difficult to control. I'm working on it.

If I were an Aes Sedai in the books, I'd probably be a somewhat fierce Yellow.

SPOILERS! My favorite White in the books is Seaine Herimon. I admire Seaine's resolve to do what's right by the letter of the law - that is why Seaine upholds Elaida as Amyrlin, but only until Egwene points out that some of the Sitters who voted for Elaida were Black Ajah, making that raising illegal. After receiving that new information, Seaine does the logical (but incredibly difficult) thing: She supports Egwene. Being able to change one's opinion based on new facts is a very admirable trait.


I also admire Seaine because she uncovered several Black sisters as a Black Ajah hunter. That took logic, courage, and cunning. And I admire how Seaine went to the Red Ajah quarters to recruit Pevara to be a Black Ajah hunter. Relations between the Ajahs were strained (to say the least) at that point in the books. Going into the Red quarters to speak with a Red sister was a clear act of courage.


I also admire Daigian Moseneillin. She is so weak in the Power that she just barely gained the Shawl, but her logic is impeccable, making her a perfect White. Unlike some Whites, she acknowledges that she has emotion, but she controls it. She continued fighting for the Light after losing her Warder, she showed incredible strength by refusing Healing for her grief, and she was patient with Nynaeve as she taught her the hundred weaves. Though Daigian was barely more than a servant among other Aes Sedai, due to her weakness in the Power, she still stayed among them and contributed where she could. She could have always left and gone somewhere among "normal" people, where she would be respected as an Aes Sedai and as a minor Cairhienin noble. Instead, she made the hard choice. So when I cosplay, I cosplay as Daigian.

I've been a fan of the Wheel of Time series since 2004. Somehow it feels like forever.

I read part of Nynaeve's Accepted test over someone's shoulder while sitting in a waiting area in late 2003. I finally picked up Eye of the World in April 2004 during a visit to Manhattan (New York City, USA) with my college's chamber singers. As soon as I really got into the book I was hooked - though the prologue really confused me!

My favorite hero is Perrin. He's quiet and was never one to seek the spotlight, but he does what needs to be done.

Alviarin is my favorite bad gal. She's very human...you see her when she's strong and when she's weak and disgraced. I don't agree with any of her decisions, but she's a fascinating character.

My favorite book and scene is The Gathering Storm, when Egwene takes charge of the novices during the attack.

I think I'd be a reluctant apprentice to the Wise Ones.

I found TarValon.Net through LiveJournal, which tells you how long ago that was!


I stayed and became a senior member because of the sense of community I found here. Tar Valon has seriously enriched my life.

Reading, definitely. I like to read on my Kindle in the bath.

Various singer-songwriters. Ask me if you're that curious :)

Star Trek: Deep Space Nine is my favorite series. Yes, I like it even better than The Next Generation.

My favorite series, hands down, is the Old Kingdom trilogy by Garth Nix (the books are Sabriel, Lirael, and Abhorsen). If you haven't read it, go pick it up. I also read some pretty trashy romance novels...

When I was in middle and high school I wanted to be a choir teacher. I actually went to university as a choral education major, but I changed my major to English halfway through my junior year. I could have never predicted where I am now, but I'm happy with my life.