Jeffan Caliarthan is an Aes Sedai of the Blue Ajah, and formerly a Gaidin of San d'ma Shadar. He demoted in January of 2015 to take advantage of the newly-implemented Integration system. He has contributed to the Tower in numerous staff positions, and has served as Editor of the Tar Valon Times from November 2011 to August 2012, and again from November 2014 to March 2015, as well as Social Marketing Manager from September 2017 to November 2018. He served as Director of Marketing from August 2018 to July 2019. Jeffan has earned fourteen gold and fifteen silver merit badges, eight Members' Choice Awards, two MDD Awards, and was awarded the Amyrlin's Award for Unsung Servant for 2012, the Amyrlin's Award of Volunteer of the Year in 2018, and the Keeper's Award for Non-Membership Administrator of the Year in 2018.

I knew from the moment I knew Integration was happening that I would end up in either Blue or Brown. For me, it wasn't really a question that I'd go elsewhere. Upon Guesting with both of the Ajahs, my decision became even more difficult, as I related really well to both of the Ajahs. I actually left Blue to guest elsewhere, and stayed in Brown. I eventually came back to Blue, because I was pretty set on Brown at the time, but wanted to double-check. Immediately, I felt at home, and aspired two weeks later.

I definitely plan and think things through - at least when it comes to the big things. However, I'm also very spontaneous and instinct-driven, which I also believe to be a Blue trait. I make impulse buys, I enjoy going off on adventures and trying new things, and just overall enjoying and making the most of life. I'm also an incredibly direct person, and I'm not all that subtle - both of which are definitely Blue traits.

I'm definitely part of the Moiraine fandom, which I do admit is a little bit over-hyped. She just represents everything that's Epic Fantasy to me. She's the one who comes and changes these guys' lives, and then disappears. Her story is completely epic, and her return was probably my favorite part of the last three books.

My 6th grade teacher mentioned an epic fantasy series that had to do with dragons, and at the time I was completely obsessed with dragons - it was actually kind of ridiculous and embarassing. So I picked up The Eye of the World and read about half of it, but got a little lost (I was 11 at the time!) so I put it down. About six months later I picked it up again and read it all. I was a little sad realizing that there weren't any "real" dragons in it, but I quickly overcame my initial sadness once I realized how utterly awesome the series was. 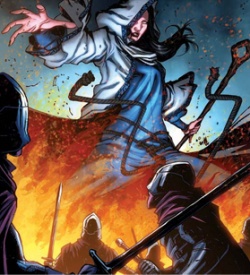 This is why I love Moiraine - she's a badass.

In the first few books, it's Moiraine all the way. I absolutely love her. She's this mythical figure that we all hope will enter our lives some day to take us away from our humdrum lives, and she's absolutely fantastic. However, when she started playing a more minor role in the series, I eventually came to love Rand. I know, he's a bit of an idiot sometimes, and he's always down on himself moaning about the women he's killed, but he becomes a really badass character! He's like this God among men with all the insane power that he has, and it's kind of ridiculous what he's able to do and how much he's able to influence the world with that power. Nynaeve is also a big-time favorite, just because she's so opinionated and she doesn't let anything get in her way, and that's definitely something that I admire. Another honorable mention is Cadsuane, simply because she's a pretty fearless woman.

Padan Fain all the way. He is the most detestable character in the entire series. He's been so twisted and corrupted by The Dark One that he's become almost a victim, but then he also brings Mordeth into himself, and it just creates this absolutely wicked character with a lot of unknown powers. He's been my favorite guy to hate for a long time. Close seconds are Lanfear for being another pretty fearless bitch, and Moghedien, simply because she's just so damned sneaky!

My favorite book is probably The Great Hunt. It's such an epic volume, and it does so much for character development. They're all realizing their paths in life and that they aren't farm folk anymore, and it's really interesting to see them transform as individuals. And the end scene at Falme? Well, that just kind of speaks for itself. So much happens it's just ridiculously awesome.
My favorite scene is kind of an ongoing thing. I love every interaction between Nynaeve and Moghedien. I simply love how much they loathe each other, and all of their scenes leave me holding my breath. The first time when they had their battle in the Hall of Artifacts in Tanchico was totally jaw-dropping, and that was the first time that I actually cheered out loud at a book. Ever. My other favorite scene is when Nynaeve finally captures her with forkroot. It was fantastic seeing Moghedien totally owned.

I'd probably want to be a sage innkeeper or something. You know, the type that has a lot of information and knows all the gossip around the the city (and the world, most likely), and keeps people informed for a price. I'd want to be that invaluable character that knows absolutely everything. I'd be a bit of a hussy as well, using my reputation to lure men into bed, simply because it totally fits my personality. I'm definitely not someone who's suited for fighting, so I'd stay the heck away from being a Soldier or Warder. Being an Aes Sedai (assuming men could become Aes Sedai) would be cool, but I just don't really see it fitting my personality too well. I mean, don't get me wrong, it'd be friggin' awesome to be able to do that kind of stuff with the Power, but it's just not me, unfortunately!

I found TV.Net through a general search in google for "Wheel of Time" - I was looking up the answer to a question I had in the first book and this site just popped up. I saw it had a chat room and I joined the same day. As for what convinced me to stay, well... that has to be the community. The members at the Tower are some of the most supportive and genuinely amazing people that I have ever met, and I couldn't imagine not being apart of that.

I work as an Administrative Assistant for a painting contractor. It's a typical 9am-5pm, Monday through Friday gig that I really love.

I read a lot of fiction, and play a lot of video games. I'm pretty big into the 3DS console as well as the Wii U. I'm currently getting into the Legend of Zelda games for the first time, but my true love will always be Pokemon. You can ask me almost any question about those games and I'll be happy to answer and discuss them. I'm also a huge fan of board games and playing Dungeons & Dragons. An entire wall in my dining room is completely filled with board games, and I have a regular D&D group that I DM that meets weekly; it's a lot of fun.

I love things with a good beat that just make me want to dance, so there's quite a bit of pop in my collection. I also listen to a bit of Hip-Hop/R&B, some country, a bit of jazz, and a lot of Broadway musicals. My favorite artists are P!nk, Vanessa Carlton, Britney Spears, Adele, Cher, and Florence + The Machine.

My favorite movie(s) are the Lord of the Rings films by Peter Jackson. I could watch them every day, including the commentaries, behind the scenes, and all that other good stuff, and not get bored in the slightest. As far as television shows go, it really depends on my mood. I've been watching Grey's Anatomy since the very first episode, and I'm terribly invested in that show. I love reality competitions when there's an element of skill involved - stuff like RuPaul's Drag Race, Top Chef, Project Runway - I like those. I'm not so much a fan of the reality competitions that don't involve skill, like Big Brother. I also really love Parks & Recreation - it's a good background show when you just need to unwind.

I'm a big fan of Brandon Sanderson and his Mistborn series, and I have pretty high hopes for his Stormlight Archive novels. The Bartimaeus Trilogy by Jonathan Stroud is another great YA series with a bunch of wit that makes me laugh quite a lot, which is always a plus for a book. I'm also a fan of Blake Charlton's Spellwright Trilogy and everything Valdemar by Mercedes Lackey.

Like all kids, I went through the marine biologist phase. I was obsessed with the ocean and how cool it was. I wanted to dive underwater with sharks and whales and jellyfish and just have fun - but then I realized that very rarely would I actually get to do that as a marine biologist, and that most of my time would be spent in a lab, and that's just not really my type of thing. Then I wanted to be a psychologist, since I knew from experience how much of an impact they can have on peoples lives, but, again, I eventually realized it wouldn't be for me. After that I wanted to be a Librarian or a small book shop owner, but eventually fell into doing admin work, which I actually enjoy quite a bit. Maybe someday I'll have a small book shop, but we'll see what happens.